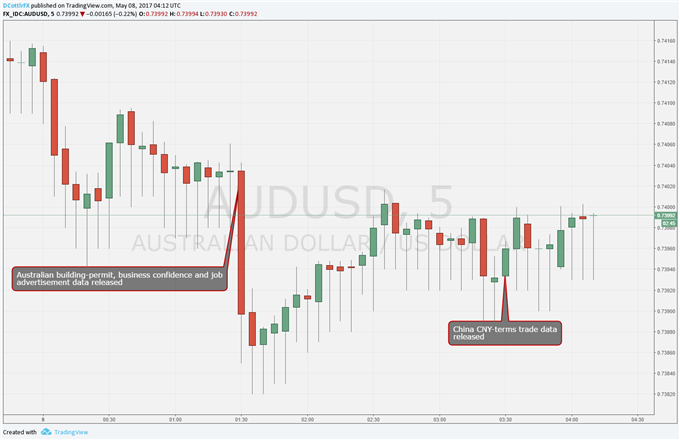 Get live coverage of major Asia/Pacific economic events. Check out the DailyFX webinars!

The Australian Dollar didn’t react much on Monday following the release of a higher than expected trade balance out of China. It may be more focused on matters closer to home.

In Yuan terms the world’s second-largest economy ran an April trade surplus of 262.3 billion. That was well above both the 197 billion expected and the March level of 164.3 billion. However, the month’s rise in exports missed expectations, coming in at 14.3% when the markets had hoped for a 16.8% rise. Imports missed too. They rose 18.6% against expectations of 29.3%

Still, China’s export outlook seems rosy enough as the threat of a trade war with the US looks to have diminished. US President Donald Trump has declined to follow through on much of the protectionist rhetoric he unleashed against China on the campaign trail. Indeed, he now appears to need Beijing’s aid in dealing with recalcitrant North Korea.

The International Monetary Fund has upped its forecasts for global demand, which should bode well for international traders like China.

On the trade coin’s other side, the extent to which broad domestic deleveraging will weigh on internal demand, and therefore import levels, remains uncertain but it is something investors are watching closely

The Australian Dollar can often act as a proxy for China market bets given its home’s strong export links to China. However, it did not obviously do so on Monday, possibly as investors continued to digest a slew of Australian data. This was by no means universally gloomy but news of a surprise March collapse in new building permits caught markets out earlier.

AUD/USD hovered around the 0.73960 area after the Chinese release, not moving far from its levels beforehand.