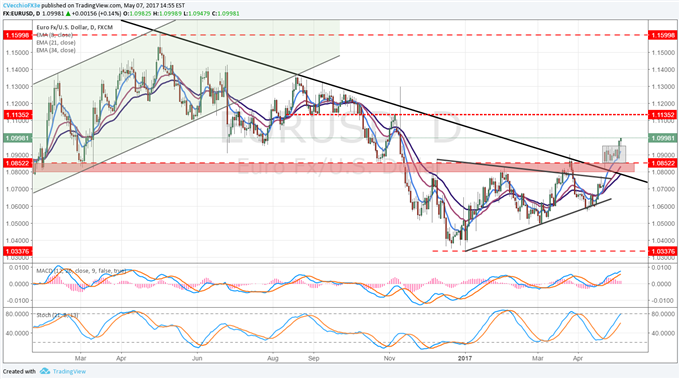 In thin pre-market trading, the Euro is trading slightly higher than it’s close on Friday versus the Japanese Yen and the US Dollar, as the last bit of French political risk premium vanished from the near-term horizon. The second round of the French presidential elections turned out as was widely anticipated, with centrist Emmanuel Macron beating populist Marine Le Pen by a margin of 65.5% to 34.5%.

While the election result in and of itself is a landslide win by Macron, it’s lead to very little upside in EUR/USD. At the time this report was written, a pre-market composite quote from Bloomberg shows a 1.1017/1.1021 bid/ask spread.

The small move higher can be attributed to the fact that polls ahead of today’s vote predicted upwards of a 20-point victory for Macron, so the Macron victory was widely discounted into price already. After the first round of the French elections, EUR/USD 1-month implied volatility sank to as low as 7.47%, after trading as high as 13.45% on April 17.

EUR/USD may have further upside ahead of it yet, as it continues to work its way higher after breaking out from a year-long downtrend. The bullish run towards 1.1135 remains the near-term focus so long as price holds above 1.0850.