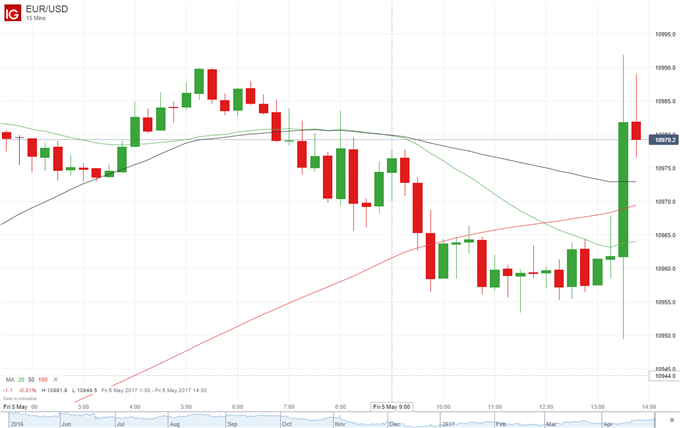 US Dollar Under Pressure Despite US Nonfarm Payrolls Rebound

- US nonfarm payrolls increased by +211K in April and the unemployment rate fell to 4.4%.

- But the internals of the report were weak, with wage growth slipping and the labor force participation rate falling.

US nonfarm payrolls increased by 211,000 in April, considerably above the 190,000 forecast. But the uncharacteristically poor payrolls number last month when just 98,000 new jobs were created in March was revised down to 79,000. On-month average hourly earnings came in as expected growing 0.30% month-on-month, but March’s rise of 0.20% was also revised down to 0.10%. On-year, average hourly earnings, meanwhile, missed estimates rising 2.50% year-on-year against expectations of 2.70%. Again, last month’s 2.70% rise was revised down to 2.60%.

Another blot was the labor force participation rate falling to 62.9% from 63% in March, although the unemployment rate dropped to 4.4% in April from 4.6% in March.

So despite the strong headline figure, the details of April's US labor market data have disappointed. Ironically, this is the opposite of las month, when solid numbers under the hood of the report offset a poor headline number.

The Dollar has dipped versus the Euro in the immediate aftermath of the report, which fails to hammer home the certainty of a Fed rate hike in June. Since Wednesday’s hawkish Fed update markets had increased their certainty of a June hike to 90%.