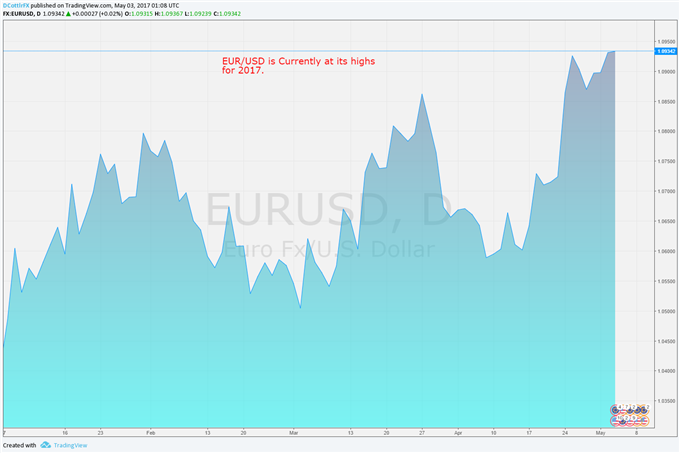 We will be covering the Eurozone GDP figures LIVE starting 15 minutes before the release. Sign up for it and other webinars on the DailyFX Webinar Calendar.

Euro bulls can hope for a little support from economic data on Wednesday provided all goes as planned.

The markets expect a solid official first-quarter Gross Domestic Product print out of the Eurozone when initial estimates see daylight at 0900 GMT. Growth is expected to be 0.5% on the quarter and 1.7% on the year. If so the figures will top their equivalents from the US but undercut the UK. Still, they will probably be “good enough” for markets already largely bought-in to the tale of measurable if gradual recovery as told once again by European Central Bank President Mario Draghi last week.

As-forecast data will mean the same growth rates as those seen in the last three months of 2016. The evidence is as ever mixed before the fact, but there are plenty of hopeful signs. Euro zone Purchasing Managers Indexes have been quite strong of late, but retail has been generally weaker.

Growth results already released from France have been decidedly underwhelming (0.3% from 0.5% in the last quarter of 2016), but Spain has done better and even France may have taken an election hit. It also seems unlikely that investment growth will match the brisk 5.1% annualized pace it managed at the end of last year.

The markets will also get a look at German unemployment figures for April. These come out at 0755 GMT, ahead of the Eurozone. The March fall took joblessness to its lowest levels since the country was reunified in 1990, and yet more falls are expected.

All up these look like a quite encouraging set of data for the Eurozone and may help ameliorate a backdrop dominated by rising Brexit acrimony and the still simmering problem of Greece’s long-term future within the bloc.

The numbers come as the single currency is at or close to its highs for 2017 against the US Dollar.

However, while the data from the “EUR” side of the currency cross have broadly improved, it might be a mistake to impute too much of this strength to that alone, especially with a Federal Reserve monetary policy meeting looming.

It must be at least as likely that the last month’s weaker US economic numbers have cast some doubts on the likely longevity of the Fed’s interest-rate hawkishness, even if the markets still think that two more rises are probable this year.