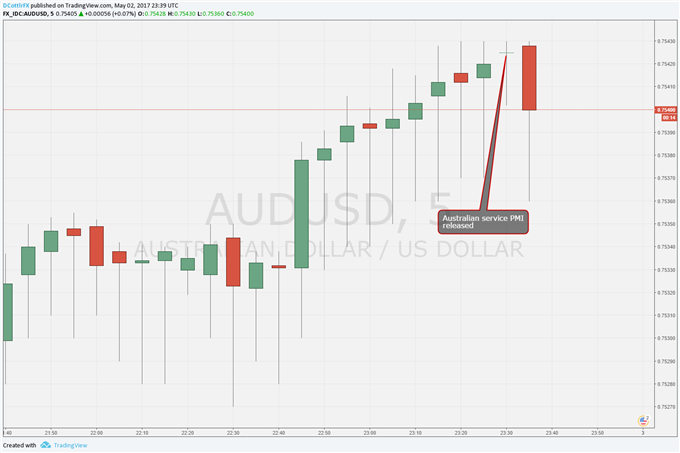 Find out what traders think of the Australian Dollar and the other Asia/Pacific majors here.

An already-higher Australian Dollar didn’t get much more lift Wednesday despite encouraging news from its home country’s service sector.

The Performance of Services Index from the Australian Industry Group came in at 53.0 in April, above the 51.7 March print. This measure mirrors the Purchasing Managers Indexes released elsewhere, with any reading above 50 signifying expansion.

AIG said that four of the five sub-indexes which contribute to the headline saw gains on the month and that the laggard, stocks on hand, shrank at a slower pace.

This print came after Monday’s solid manufacturing sector PMI. It registered a seventh straight month of gains. At 59.2 it also chalked up its strongest reading since February and, before that, May 2002. On Tuesday came a Reserve Bank of Australia monetary policy statement which was taken by the market as less downbeat than the previous one, even though it was a strictly neutral document.

AUD/USD remained in the 0.7540 area after the service-index release. It has however risen quite steadily over recent days and there may now be some reticence in the market before investors hear from the US Federal Reserve. Its May policy conclave will end on 1800 GMT Wednesday, which will be Thursday for the Asia/Pacific region.

The Fed Funds target rate is not expected to rise further but the extent to which Chair Janet Yellen and company seem to set the stage for a June rise will be the key near-term issue for markets.

At present the futures-market odds of a June move are a little better than 50%.