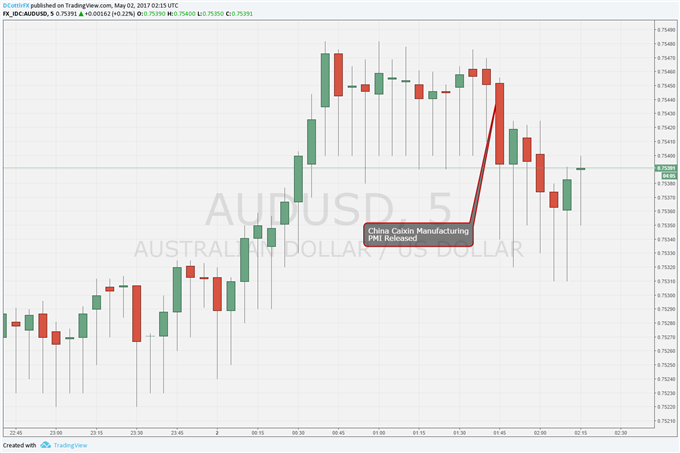 Find out herehow other traders feel about the Australia Dollar and all other major traded currencies.

An Australian Dollar focused on Tuesday’s monetary policy decision from the Reserve Bank of Australia failed to move much on disappointing news out of China’s manufacturing sector.

The private Caixin Purchasing Managers Index (PMI) came in at 50.3 for April. That was an unexpected seven-month low for the series and well below the 51.2 chalked up in March. The logic of PMIs dictates that a reading above 50 signifies economic expansion, something this data managed by a whisker.

It was a tepid report across the board. Caixin reported an acceleration in job shedding, slower increases in output and new orders along with muted consumer demand. Companies generally expect output to increase over the next twelve months, but the degree of confidence with which they do has fallen.

The Caixin survey covers smaller, private firms as opposed to the official PMI which scrutinizes larger companies which often have heavy state involvement. However, this month they have chimed, gloomily. Last Sunday’s official release marked a six-month low.

However perhaps this weaker growth shouldn’t be too surprising as China reins in stimulus to concentrate more on deleveraging and economic reform.

The Australian Dollar often acts as a liquid China proxy thanks to Australia’s huge raw material links with the world’s second-largest economy. In the event though, AUD/USD slipped just a little after the release.

Investors await an RBA policy meeting at 0430GMT. The record low 1.5% Official Cash Rate is just about universally expected to remain unchanged. However, there is thought to be some chance that local economic data have been strong enough to see the RBA perhaps in more unambiguously cheerful mood. This prospect has lifted AUD/USD in the run-up.