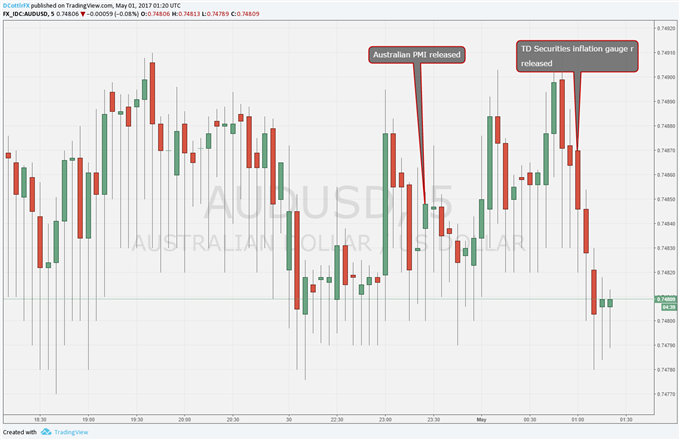 What do retail traders’ AUD/USD buy and sell decisions hint about the price trend? Find out here.

Divergent reports from manufacturing sectors in China and Australia failed to move the Australian Dollar much Monday as investors focus on Tuesday’s looming Reserve Bank of Australia policy decision.

The Purchasing Managers Index from the Australian Industry Group rose to 59.2 in April from 57.5 in March. This was a ninth straigh month of expansion for the series (in the logic of PMIs any reading over 50 means an increase in output for the sector in question). It was also the strongest result since February but, before that, the best since May 2002.

Manufacturers were upbeat about prospects across sectors but many exporters complained about tight margins and competitive pressures.

By contrast, China’s manufacturing acticvity slowed more than expected last month according to an official PMI report released on Sunday. Its PMI fell to a six-month low of 51.2 in April, from March’s 5-year high of 51.8. Demand fell across the board according to the survey, but the biggest decline was seen in input prices.

AUD/USD was steady around the 0.74860 mark for much of the Asia/Pacific morning and didn’t react much to these data. However, it did start to slip following the release of a private-sector inflation gauge. The TD Securities/Melbourne Institite releases a monthly inflation roundup which for many traders fills the gap left by official consumer price figures’ quarterly arrival.

The MI gauge rose 0.5% on the month and 2.6% on the year. Both of these were relatively perky, which might make it hard to see why the Aussie should slip. However, the so-called “trimmed mean” was weaker, rising by 0.3% on the month and 1.7% for the year. Investors don’t think the RBA will do anything to their record low 1.5% base rate tomorrow, and indeed many think it will endure for the rest of 2017, with relatively soft inflation one key reason why.

Nervy, but in range: AUD/USD awaits the RBA