Japanese Yen Unimpressed by a Barrage of Economic Data

Would live coverage of major market events help your trading strategy? Check out the DailyFX webinars.

A vast dump of Japanese economic data failed to move the Yen much Friday, coming as it did hard on the heels of a policy decision from the Bank of Japan.

That said, the official Consumer Price Index managed to underwhelm even modest expectations for March. It rose 0.2% on the year. That was below both the 0.3% rise expected and the 0.3% gain of February. But subdued inflation is nothing new in Japan. Indeed, the central bank alluded to the stubbornness of low pricing expectations less than 24 hours ago.

There was a crumb of good news for policymakers desperate to stoke the CPI. The measure which excludes volatile fresh food prices rose 0.2%. This was as expected but it was also the third straight month in which that index has risen. A rare sight indeed, if hardly a conclusive one for inflation hawks. Excluding both food and energy, the CPI fell 0.1%.

The jobless rate came in at a still-low 2.8%, just under the 2.9% expected. Household spending remained mired, falling 1.3% on the year. That was much better than the 3.8% collapse of February but still hardly cause for celebration.

That wasn’t the end for the day’s data rush. Industrial production slipped 2.1% on the month in March, hugely worse than the 0.8% expected. The on-year rise was 3.9%, below February’s 4.7% gain. Bringing up the rear, and ending matters on a happier note, retail sales rose 2.1% on the year. That was well above the 1.5% predicted and the previous month’s 0.2%,

Overall these numbers speak to the modest expansion alluded to by the Bank of Japan in its monetary policy meeting Thursday. They also speak to the endurance of weak inflation, which the BoJ also ruefully pointed out. It doesn’t expect the CPI to get up to its 2% target until the next fiscal year, and you don’t have to go far to find an economist who finds even that forecast optimistic.

As both the growth and inflation themes are now to varying degrees mature, it was not surprising that the Yen didn’t get far after the data. USD/JPY stated around the 111.23 area as the numbers filtered out, only to push up to 111.33, most likely as the weak inflation and household spending numbers sunk in. 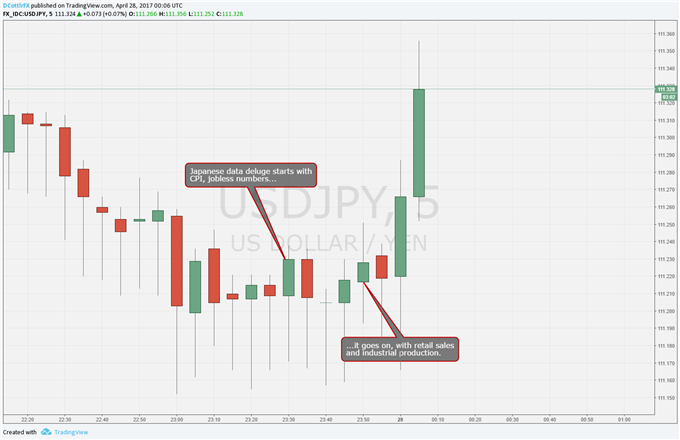