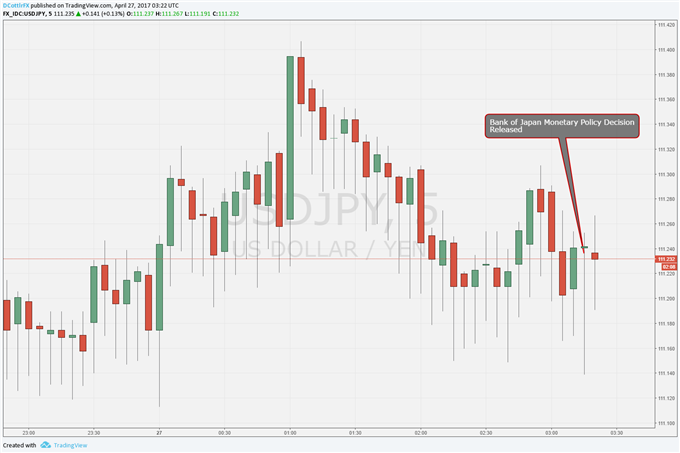 Live commentary on major market events like the Bank of Japan’s policy call can help you hone your trade strategy. Take a look at the DailyFX webinars.

The Japanese Yen was steady against the US Dollar Thursday as the Bank of Japan stuck to the markets’ script and kept its monetary settings unchanged.

That left the key short-term Policy Balance rate at -0.1% and the ten-year Japanese government bond yield target at 0%. The goal of a JPY80 trillion ($700 billion) balance sheet expansion this year also endures.

The Japanese central bank did upgrade its expectation for domestic growth this year, but this was also a widely-expected move given that various other bodies, notably the International Monetary Fund, have done the same. The BoJ now sees 1.6% real GDP growth in the 2017-18 fiscal year, just above the 1.5% projected in January.

The Japanese economy has expanded for four straight quarters, trade is motoring and businesses feel pretty good. However, the hoary old sticking point of subdued inflation endures. The most recent glance found consumer prices rising at 0.3% on year, miles from the BoJ’s 2% target which hasn’t be threatened since the end of 2015.

Sure enough, the bank left its core consumer price expectation of a 1.7% annual gain alone, and investors could be forgiven at this point for finding even that optimistic. It sees CPI growth hitting the 2% target in fiscal 2018.

The central bank said that Japan’s economy was turning toward moderate expansion but that risks remained skewed to the downside. It also noted that long-term inflation expectations remain weak, with price momentum “lacking”.

The BoJ’s call came against the backdrop of a broadly higher US Dollar in the wake of the Trump administration’s tax cutting plans. Among other things, thesewill offer huge falls in corporate tax rates.

As for USD/JPY alone, retail investors are modestly net-long, although the post-tax-story rise had ground to a halt in Asia before the BoJ hit the wires.