Bank of Japan to Keep Hands Off Monetary Policy Settings

Retail traders are betting on a weaker Yen ahead of the BOJ rate decision. Find out here what that hints about the price trend!

The Bank of Japan’s April monetary policy meeting will conclude Thursday and markets don’t see any scope for change.

If they are right that will mean that the official policy rate will remain steady at -0.1% and Japanese government bonds (JGBs) will be bought to keep the 10-year yield around zero and with the aim of hitting the JPY80 trillion ($720 billion) annual purchase target.

In other words, monetary policy will remain extremely accommodative and the Japanese Yen will remain pray to developments elsewhere.

That in turn means that it will be under pressure whenever the markets get a sense that US interest rates could rise faster than expected, and sought after when market risk appetite wanes. It isn’t waning at the moment, with USD/JPY propelled up this week by the global sigh of relief at centrist, pro-EU Emmanuel Macron’s win in the first round of the French presidential vote. 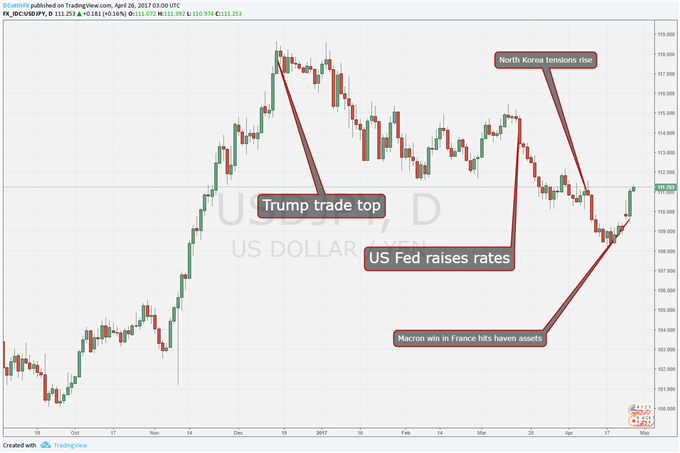 At home, the BOJ faces a familiar dilemma.

By some yardsticks, the Japanese economy is doing nicely. Businesses feel pretty confident and exports have surged. The International Monetary Fund upgraded its Japanese growth call just last week. However, the old devil here is weak inflation, and he is still very much in business.

While the Bank of Japan may upgrade its own growth forecasts Thursday, there are economic commentators who think that it could even cut its inflation call. That’s currently at 1.7% for this fiscal year (well below the official 2% target) and, with the consumer price index rising by just 0.3% on-year at last look, appears optimistic.

But what’s new? We haven’t seen an actual 2% CPI rate since the end of 2015. The next official release will come on Friday, and is expected to show another modest 0.3% gain.

There may be some hope that continued global demand into the year’s second half might finally see Japanese wages rise with some onward push for inflation, but that hope has proven forlorn before. Public inflation expectations are contained.

All up then, there seems little prospect of any monetary tightening this month, or for many more to come. And that prospect will leave the Yen to the tender mercies of the Federal Reserve, European electorates and global geopolitics.