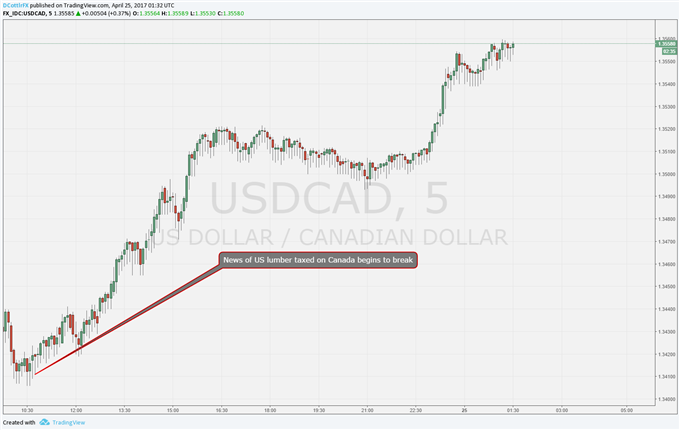 Canadian Dollar Wilts as US Slaps Tariffs on Softwood Lumber

The Canadian Dollar fell to four-month lows against its big southern cousin in Tuesday’s Asian session, reacting to news that the US would slap tariffs on softwood lumber imports from Canada.

President Donald Trump reportedly announced this decision on Monday evening during a reception with conservative journalists. The Commerce Department later said it would impose a “countervailing duty” of between 3% and 24% on Canadian lumber exporters. Commerce Secretary Wilbur Ross said total duties would amount to about a billion US Dollars annually.

US producers have long argued that Canadian lumber is unfairly subsidized because producers there can source timber from government land. Canada denies that this amounts to subsidy and that producers must sell at market rates. Dispute on the issue goes back decades.

Still, here is yet more evidence of a tougher trade approach from the White House. Lumber is one of Canada’s largest exports to the US, with about 80% of supply heading south. The question now is where else will trade-hawkish instincts strike next.

Battle of the Dollars: The US version is winning.

This new spat comes as Canada enters initial exploratory talks with China about a possible free trade deal between the two countries. At present talks are reportedly centered around what potential agreement could look like. A deal may be years away if one is struck at all. It is also all-but impossible that trade with China could ever replace the sort of exchange between Canada and the US.

Still, more tariffs from Washington could inject new urgency into the process, from both sides. Whether the US would welcome closer ties between Beijing and Ottawa is open to question.