- Money piling into European stocks after French election first round

- Emmanuel Macron is favourite to win second of voting on May 7.

After the rises in the Euro and Asian stocks, European equities are now gaining after the first round of French presidential election. The result sees centrist Emmanuel Macron and far-right candidate Marine Le Pen face-off in the second round of voting on May 7, with the pro-European political newcomer the strong favourite to win.

Euro-Zone bank stocks are also breathing a sigh of relief. They have seen their biggest jump for 12 months. EURUSD, meanwhile, continues to rise and could well reach 1.12, the high from before the US election last year. 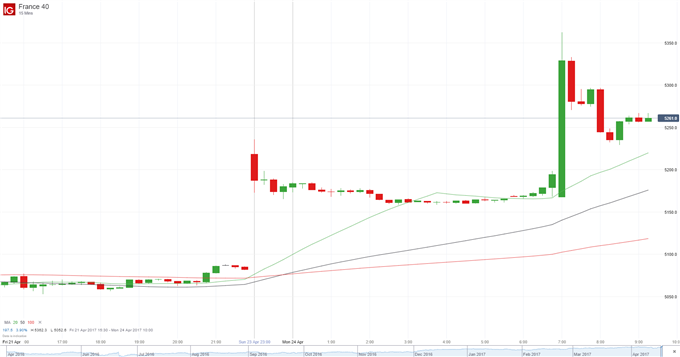 The result of the first round, although head turning in that it represents defeat for the established main political parties, wasn’t a big surprise to the markets, which were expecting Macron and Le Pen to face each other in the second round.

European stocks are now likely to rise this week as markets price in a Macron win on May 7. Le Pen threatens the existence of the EU and thus the Euro. Macron, although a political newcomer, is the ‘safe candidate’. He is the former Socialist economy minister and was once an investment banker.

He therefore is likely to reduce political uncertainty in the region – especially handy given the forthcoming two years of Brexit negotiations with the UK, and upcoming elections in Germany and possibly Italy.

It’s expected that Le Pen, give her toxic legacy, will meet with solid resistance from most of the population and that a ‘republican front’ made up of everyone except Le Pen will elect Macon France’s next president.

In the short term the markets are clearly welcoming the expected victory of Macron – but there could be more uncertainty and EURUSD volatility to come. There will be legislative elections in France in June. The big risk now is that Macron (who lacks political party machinery and allies within parliament), assuming he wins, will not be able to secure a Parliamentary majority with which to implement his economic reforms and thus French politics remains infamously lethargic.