- Global growth and trade appear to be picking up strength but risks for the Euro-Zone economy remain ‘tilted to the downside’.

Growth in the Euro area economy remains tilted to the downside and inflation subdued, European Central Bank President Mario Draghi said on Friday. His comments, which reaffirm the Bank’s March policy stance, keep fundamental pressure on the single currency and dispel any hopes – though slim – that strong data out of the Euro-Zone of late may precipitate a shift in the ultra-accommodative stance from the ECB.

Draghi told the International Monetary and Financial Committee in Washington DC Friday that there was no convincing upward trend in underlying inflation, and that Euro-area growth risks remain to downside.

“While euro area headline inflation has increased markedly over the past year, underlying inflation is expected to continue to remain subdued.”

He said a very substantial degree of monetary accommodation is still needed to secure a sustained return of inflation rates towards levels below, but close to, 2% – in line with the ECB’s mandate. “In order to reap the full benefits of our monetary policy measures, actions in other economic policy areas are necessary to strengthen long-term growth and resilience in the euro area.”

Consumer prices rose by an annual rate of 1.5% in March, after hitting the ECB's target rate of 2% in February, the European Commission confirmed Wednesday. But there has been encouraging data out of the Euro-Zone since. IHS Markit's Flash Composite Purchasing Managers' Index hit a fresh six-year high in April, led by a stellar reading in France, to signal a strong start to second quarter in the Euro area. Earlier this week Consumer confidence in the Euro area rose to its highest since 2007, while construction sector growth rose at its fastest since 2012. However, it’s clear this upbeat news shouldn’t get Euro bulls excited.

EURUSD has moved back below in the 1.07 handle in Friday trade as it await the outcome of the first round of the French presidential elections on Sunday, which will likely spark much volatility in Euro crosses and European stocks in the week ahead. 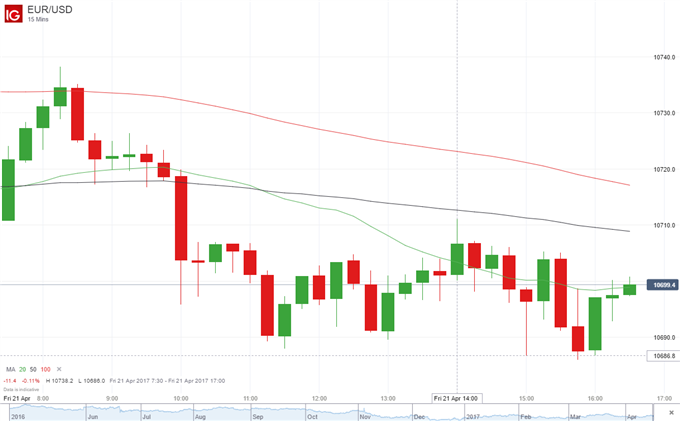