-Job creation also rose to the highest for almost a decade.

There was more good news for the Euro-Zone economy Friday morning with the Euro-Zone PMI hitting a fresh six-year high in April to signal a strong start to second quarter in the Euro area.

The Markit Euro-Zone PMI rose to 56.7 in April, according to the preliminary ‘flash’ estimate. The latest reading was the highest since April 2011 and it beat the estimate of 56.4, the same level as March.

Markit said Job creation also rose to the highest for almost a decade as firms boosted operating capacity in line with buoyant demand and widespread optimism about future prospects. Price pressures meanwhile remained among the strongest seen over the past six years.

Commenting on the flash PMI data, Chris Williamson, Chief Business Economist at IHS Markit said: “The eurozone economy has enjoyed a strong start to the second quarter. The April flash PMI is running at a level consistent with 0.7% GDP growth, up from 0.6% in the first quarter. Such strong growth, if sustained, will inevitably lead to upward revisions to economists’ 2017 forecasts

However, the encouraging data, like yesterday’s, are likely to play second fiddle to politics, with the first round of the French presidential election taking place on Sunday, April 23. 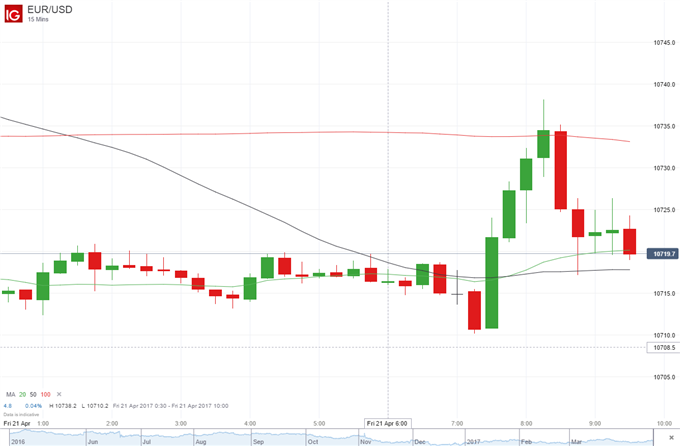