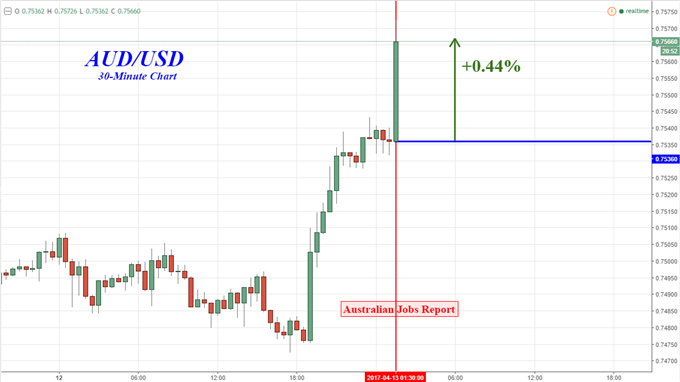 What do retail traders’ buy/sell decisions hint about the Australian Dollar trend? Find out here.

The Australian Dollar continued shooting for the stars after a better-than-expected jobs report crossed the wires. In March, Australia gained 60,900 positions against an expectation that the nation would add just 20,000. This was the highest amount of jobs added within a month since October 2015. In February, the country gained 2,800 employees (revised higher from -6,400).

Most of the gains were derived from the full-time sector which added 74,500 positions. More impressively, we haven’t seen such a remarkable increase in full-time jobs since 1987 – or 30 years. As for the part-time division, it lost 13,600 employees. The unemployment rate held steady at 5.9 percent as expected. All the while, the participation rate increased to 64.8% against expectations of it hovering at 64.6%.

As the data crossed the wires, Australian front-end government bond yields soared. This indicated that the markets interpreted the data as hawkish for RBA monetary policy expectations. However, at April’s meeting the Reserve Bank of Australia held rates and maintained a view that current policy will deliver sustainable growth and a return to the inflation target overtimes. Perhaps they might mention this jobs report during May’s interest rate decision.

Earlier today, the US Dollar experienced losses against its major counterparts after U.S. President Donald Trump claimed that the greenback is too strong. As of this market alert, the employment report helped bring the Aussie’s rally against the USD since the comment to about +1.25%.