- Sterling climbed then eased back marginally after a UK labor market report that was broadly in line with expectations.

- Average weekly earnings are now growing at the same pace as inflation, suggesting no squeeze yet on consumers.

The UK unemployment rate was unchanged at 4.7% in February, in line with expectations and its joint lowest level since 1975, suggesting that the UK labor market remains tight and that there is little sign yet of the slowdown in economic activity predicted by some forecasters before and after the Brexit decision to leave the EU. That, they suggested, could lead to the unemployment rate rising.

Meanwhile, UK average weekly earnings were unchanged from an upwardly revised 2.3%, bang in line with the current inflation rate of 2.3%. That, in turn, suggests no squeeze yet on consumers’ purchasing power and therefore their spending and the growth rate of the economy.

Commenting on the figures, ONS senior statistician David Freeman said:“A joint record employment rate and a new record high for the number of vacancies point to continued strength in the labor market. However, higher inflation, coupled with subdued earnings increases, means that the real growth rate in pay has tailed off to just above zero.”

In response to the data, the British Pound rose but then gently eased back. 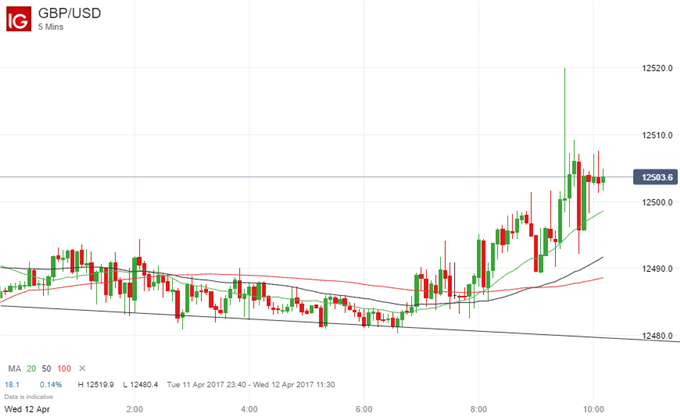 The data are unlikely to alter expectations for UK interest rates, which are likely to rise in due course if inflation rises much further above the Bank of England’s 2% target. For now, the Bank is on hold and is likely to be wary of moving rates either way while the Brexit negotiations take place for fear of being accused of a political rate move.

That should allow the Pound to continue to creep higher against both the Euro and Dollar as GBP/USD struggles to move above the psychologically important 1.25 level.

If you’re looking for trading ideas, check out our Trading Guides; they’re free and updated for the first quarter of 2017