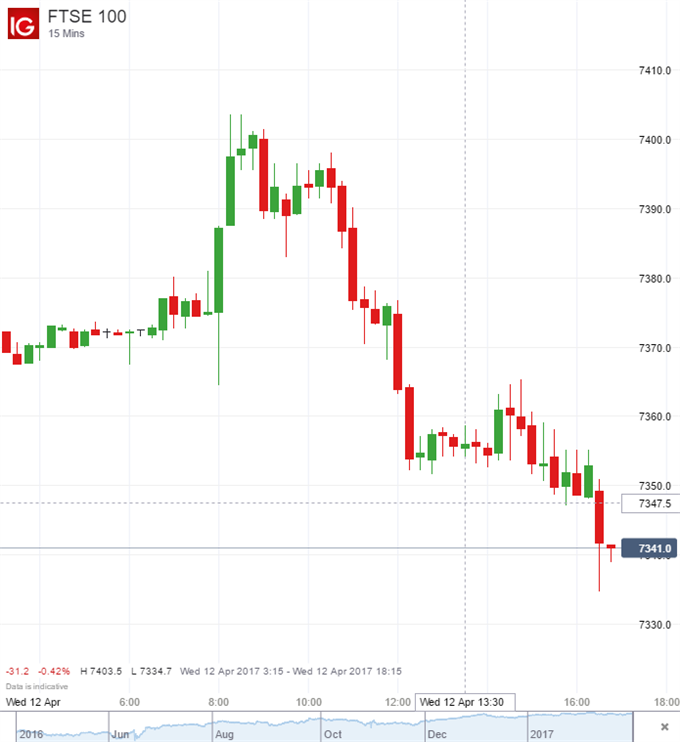 After yesterday’s losses, European stocks are fading once again as global geopolitical tensions continue to dominate and fret investors. UK and European indices have been unable to hold on to all of their early gains, with the FTSE 100 unable to keep a hold on the 7,400 level.

Today, China’s premier Xi Jinping and US President Donald Trump spoke by phone to discuss the escalating tensions with North Korea, and a state-run Chinese newspaper threatened to cut off North Korea’s oil supplies if it tested a nuclear weapon.

Meanwhile, Trump said Wednesday that Russian President Vladimir Putin is partly to blame for the crisis in Syria and condemned his support of the ‘truly evil’ Bashar al Assad. That’s set the stage for tense talks between US Secretary of State Rex Tillerson and his Russian counterpart Sergei Lavrov in Moscow, where Putin said ties between Russia and the US appear to have deteriorated under Trump.

The rising tensions over Syria have caused Russian stocks to lose all their post-US election gains.

France’s election later in the month is also giving investors a reason to seek cover in safe havens. Gold and the Japanese Yen have both gained, though few suspect they can remain at these high levels in the long term.

The Euro is also in a downtrend versus the Swiss Franc, which is “significantly overvalued” according to the Swiss National Bank.