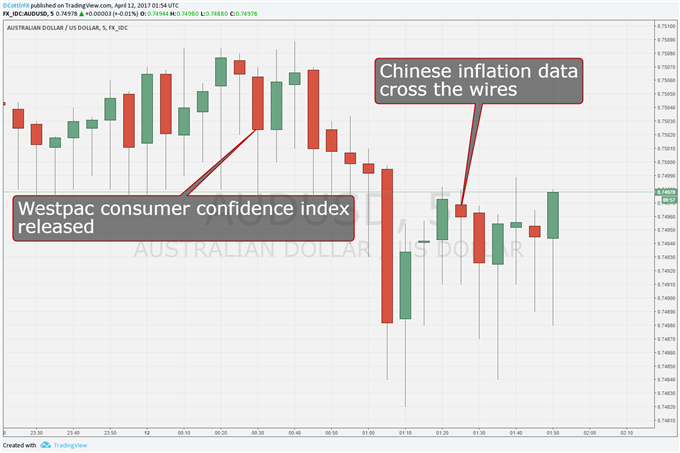 The Australian Dollar was unmoved against its US counterpart Wednesday despite ongoing gains for Chinese consumer prices, with global geopolitical risk running markets’ table.

The country’s official March Consumer Price Index rose 0.9% on the year, slightly below the 1% gain expected but above February’s 0.8% increase. On the month prices fell 0.3% as crucial food prices slipped 1.5%.

Producer prices for the same month rose 7.6%, just above the 7.5 rise predicted. This series is at six-year highs.

Markets had been looking for a 1% on-month gain after February’s 0.8% rise, and an annualized 7.5% rise.

The Australian Dollar often acts as the markets’ favorite liquid proxy bet on the Chinese economy, which is understandable given its home country’s vast and extensive raw-material export links with China. However, it did not obviously do so in this case.

Economic data of any sort has found itself playing distant second fiddle to investors’ geopolitical risk aversion since the US launched its missile strikes against Syria last week. This seems still to be the case Wednesday, with AUD/USD broadly gaining, probably thanks to broader US Dollar weakness, especially against the Japanese Yen.

An earlier, rather gloomy snapshot of Australian consumer confidence saw AUD/USD edge down as markets digested it, but the Chinese numbers saw it stuck around 0.7500.