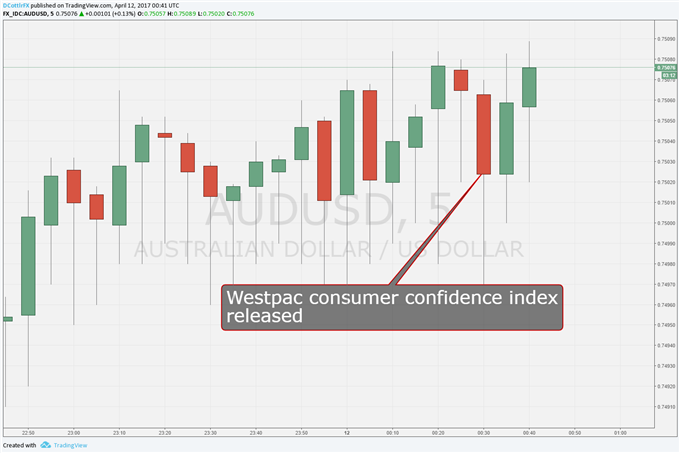 What do other traders think about your favorite currency of the moment? Check out the DailyFX sentiment page to find out.

The Australian Dollar took a modest Wednesday hit, but recovered quickly, as a barometer of consumer confidence in its home country showed that all was not well.

Major local lender Westpac’s index on the subject slipped 0.7% on the month in April, having risen 0.1% the month before. While hardly catastrophic this fits with the already-released indicator from Australia and New Zealand Bank (ANZ). Although it showed a monthly gain, that lender noted that the underlying trend remains downward.

The possibility of flagging consumer sentiment will be of deep concern to the Reserve Bank of Australia. The central bank has placed great focus on the country’s transition away from reliance on the mining sector and towards a more diverse economy with a greater consumption base. The Aussie has already been knocked this week by news of shock weakness in home-loan levels.

Clearly AUD/USD is focused on warlike global geopolitics at present, following last week’s US missile strikes on Syria. The pair had been rising as the North American session bled into the Asia start, possibly in response to US Dollar weakness elsewhere (notably against the Japanese Yen, which has been attracting its customary haven bid).

AUD/USD was steady around 0.75040 after the consumer confidence release, having initially slipped as far as 0.75020 right after it.