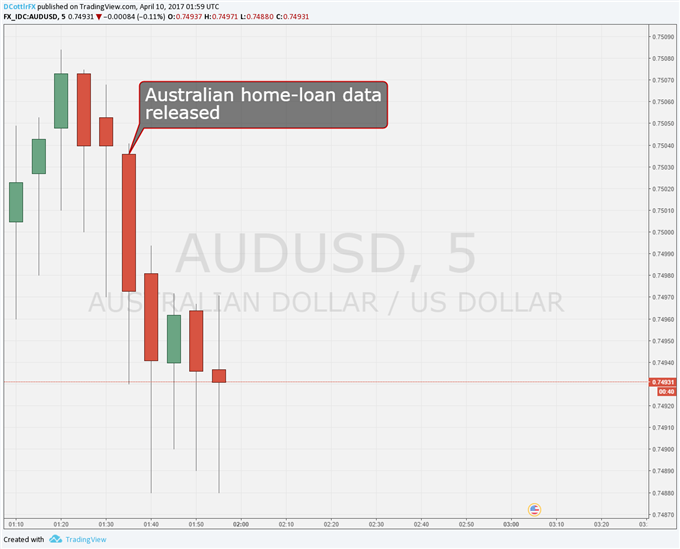 The Australian Dollar slipped a little against its US cousin Monday on news that home loans had shrunk more than expected in the domestic market.

Loans for dwellings fell 0.5% on the month in February, according to official figures. That exactly retraced January’s gain and came in much weaker than the flat outcome which markets were expecting. Investment lending fell even more, dropping by 5.9% on the month for the biggest decline since September 2015.

The Australian Dollar didn’t care for these weaker figures, although it’s unclear what effect if any they will have on monetary policy thinking at the Reserve Bank of Australia. Its officials have often said that high levels of personal debt are one reason they don’t want to cut interest rates any further, for fear of recharging the borrowing binge. However, the RBA also doesn’t want to crump consumer spending at this point, and higher rates will mean higher loan-repayments.

The RBA would probably also quite like to see some of the froth come off Australia’s housing markets, where pockets of regional vigor have some investors worried about a bubble. So, a fall in home lending may not be entirely unwelcome.

The Aussie was already under some pressure as US Dollar bulls took solace from recent Federal Reserve commentary to the effect that rates may continue to rise even if the US central bank also tightens policy via cutting its vast balance sheets. Worries that one might come without the other had seen the greenback slide at certain points last week.

The US currency has also gained against may peers, catching a modest haven bid after last Friday’s US missile strikes against Syria.