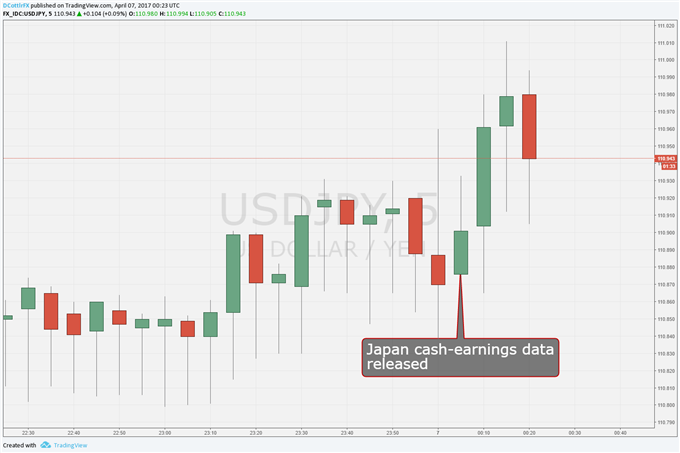 The Japanese Yen faltered against the US Dollar Friday on news that Japanese cash earnings remain subdued.

Overall earnings were flat in February compared to the same month in 2017, having fallen 0.1% in January. Cash earnings from labor alone rose 0.4%. This was a shade less than the 0.5% rise expected, but more than the previous month’s 0.3% gain. Earnings from overtime pay rose 0.6%, for the first rise of any sort since May 2016.

Workers’ wage and income data are especially interesting for Japan watchers, who are alert for any signs that long-dormant inflation could pick up as the authorities would so desperately like. There weren’t many in this release.

Moreover, wire reports this year have said that springtime wage settlements very modest, with the vast majority of companies planning a rise of less than 2% in the face of still-subdued inflation expectations. However, this week investors learned that consumer confidence in Japan picked up, which hardly suggests deep dissatisfaction with pay levels, even if this has yet to see any reflection in retail sales figures.

USD/JPY ticked up to 110.92 after the earnings data, but it’s fair to say that market attention was elsewhere.

Much focus is on US President Donald Trump’s Florida summit with China’s Xi Jinping. The greenback is probably also deriving some support from earlier official numbers showing that new, weekly US claims for unemployment benefits fell to their lowest point for nearly two years.