Euro Rallies After Tumbling on Dovish Speeches by Draghi and Praet

- ECB Chief Economist Peter Praet said rates will not rise until after QE has ended.

- The minutes of the ECB meeting on March 9 show the Governing Council decided that a change in guidance could backfire, tightening financial conditions

Speaking in Frankfurt, Draghi said that “the recovery is progressing and now may be gaining momentum” but added that curbing inflation continues “to depend on continuation of our monetary policy stance” and that it is “too soon to declare success”.Praet implied that rates will not rise until after QE has ended.

In their comments, which are likely to set the tone for the ECB Governing Council meeting on April 27, both men seemed to contradict the perennially hawkish Bundesbank President Jens Weidmann, who said in a newspaper interview published Thursday that he would be happy to see the ECB’s bond-buying program end within a year. The Euro dropped to a three-week low in response.

However, it then rallied, although the recovery was halted by the release of minutes of the previous meeting on March 9, which concluded that a change in the ECB’s policy guidance could backfire, tightening financial conditions. “Changes in the formulation [of the guidance] at the current juncture could lead to an undue upward shift in market interest rates and tighten financial conditions to an extent that was not warranted by the prevailing outlook for price stability,” the minutes recorded.

“Removing the downward bias on interest rates in the present formulation of the Governing Council’s forward guidance was seen as premature, as there was still considerable risk surrounding the economic outlook and the robustness of inflation convergence,” the minutes showed. However, “nuances in communication could convey a more positive tone on the state of the Euro-Zone economy, while signaling less urgency for further monetary policy action,” they added. 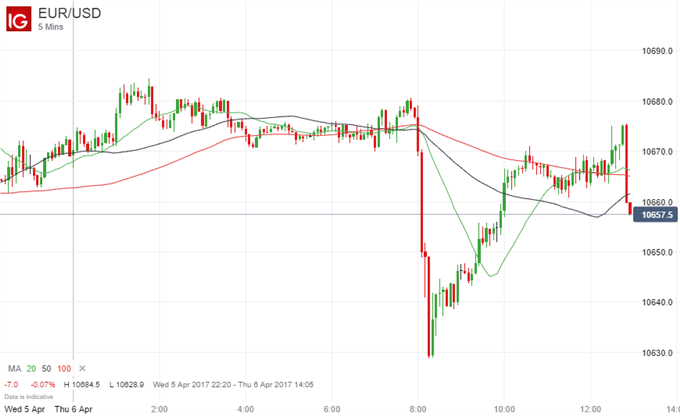 The Euro also fell against the British Pound and the Japanese Yen before recovering strongly and then easing a tad . The German 10-year Bund yield dipped then moved higher to trade at 0.264%.