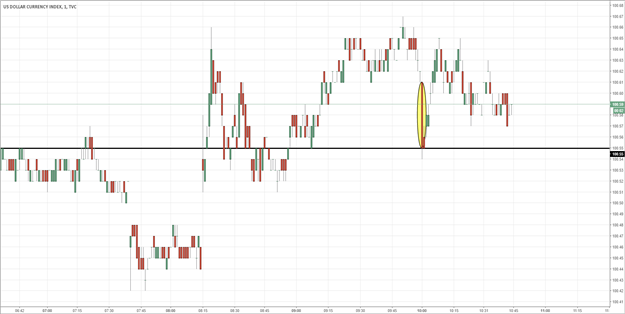 - US Dollar (via DXY Index) is largely unchanged on the morning after the data.

The US Dollar Index (DXY) is holding onto its slight gains from this morning after a batch of mixed data. The ISM Services/Non-Manufacturing Composite hit a five-month low in March, coming in at 55.2 versus the estimated 57.0. Likewise, the Employment sub-index hit its lowest level since August 2016.

Earlier in the day, the March US ADP Employment Change beat estimates at +263k, versus the consensus estimate of +189K. This suggests that the trend of lagging productivity and strong job growth persists in the US. This is certainly not the news that the Fed is hoping for as it seeks to continue on the path of monetary policy normalization.

Using a regression model, the ADP report and the ISM Services report can account for 89% of the changes in the NFP figure (R^2 = 0.89) over the past 10-years. Accordingly, the data suggest that the US Nonfarm Payrolls report would be looking for another print around +200K this Friday.

It's important to recognize that due to the unseasonally warm weather the United States experienced in the first few months of the years, jobs growth was probably 'pulled forward' from forthcoming jobs reports. There may be a giveback period, where NFPs sag relative to the outstanding figures seen in January and February.

Here’s a summary of the data this morning that has the DXY Index trading slightly higher on the day:

As shown in the 1-minute chart above, the ISM Services/Non-Manufacturing release caused the US Dollar Index to dip back to 100.55 after its release. Leading up to the data print, DXY traded at 100.61 and rose back to 100.64 shortly after. At the time that this was written DXY traded around 100.58.