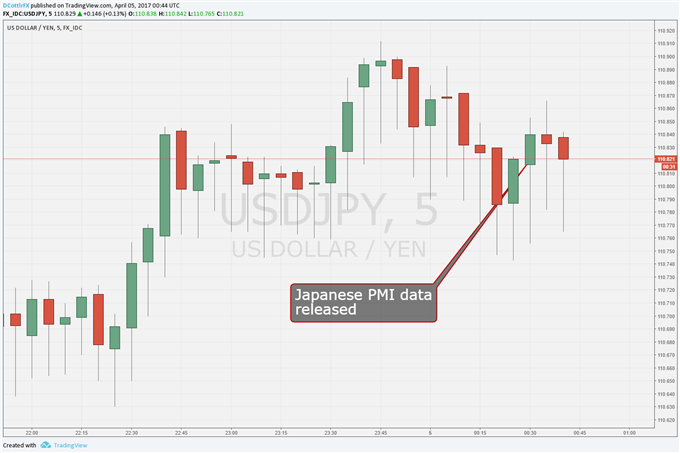 The Japanese Yen was steady against the US Dollar Wednesday after the release of an encouraging Japanese economic snapshot.

The March Nikkei Purchasing Managers Index (PMI) for the service sector rose to 52.9, up from February’s 51.3. That put the composite PMI at 52.9, a more modest rise from the prior month’s 52.2 level, but quite impressive for all that. The composite comprises both service and manufacturing sector indexes. And we already knew that the manufacturing index was at a three-month low in March.

Originating in the US, PMI indexes are released in most countries and are held by investors to be among the more timely snapshots of economic health. Any reading above 50 signifies expansion for the sector in question, with a sub-50 print meaning activity shrank.

The data gel with the prevalent Japanese economic backdrop of moderate recovery, fueled largely by offshore demand, and still-weak inflation at home. As such they rather passed the foreign exchange markets by. USD/JPY was stuck around the 110.83 level before and after the data, having clawed back a bit of the ground it lost in the previous Asian session.

Market focus is increasingly on Thursday’s meeting between US President Donald Trump and his Chinese counterpart Xi Jinping. Mr. Trump has had harsh words for countries which run persistent trade surpluses with the US and, although China is the “main offender” here, Japan comes in an admittedly distant second.

Investors are accordingly keen to see whether the White House is prepared to bite on this issue, after a good deal of barking.

Would you like live commentary on market moving events, or just to know more about financial market trading? The DailyFX Webinars are for you.