Head of the Richmond Federal Reserve Jeffery Lacker announced abruptly Tuesday that he would step down immediately after admitting involvement in leaking confidential information in 2012. Lacker has now released a statement that he disclosed information about United Stated monetary policy in 2012 to an analyst from Medley Global Advisors, a global provider of macro policy intelligence. The confidential detail that Lacker leaked was not specified in his statement, but the a report by Medley to its clients in advance of the FOMC minutes included the types of bonds that would be purchased with the newly announced QE3 (Quantitative Easing) program. The Richmond Fed President did say that he deeply regrets the role he may have played in confirming any information.

Before this revelation, the central bank leader was scheduled to retire in October. Mark Mullinix, the bank’s first vice president, will step in to serve as acting Richmond Federal Reserve President. He will serve until the board of directors of the Federal Reserve Bank hold their election on the date of the first regularly scheduled Committee meeting of next year. While Lacker was not a voting member in 2017, The Richmond Fed President will hold a vote in 2018.

This unexpected departure will add additional uncertainty as to the cumulative policy lean for the uniquely progressive central bank moving forward. As of this month, there are already two vacant spots on the Board of Governors – positions that afford permanent voting rights at policy meetings – vacated by Sarah Raskin three years ago and Daniel Tarullo just this month. Compared to the district bank’s vote for a leader in the case of the Richmond Fed’s ultimate replacement, the Governors are presidential appointments. There is speculation in the market that these picks will represent the policy proclivities up the administration. Many believe that is a hawkish policy view that would restore higher rates of return for banks, institutions and investors at the risk of tighter policy that could trouble uneven growth.

With the acceleration of FOMC rate hikes from a 12 month gap (between December 2015 and December 2016) to 3 months (December to March 15) and the current forecast for an additional two hikes this year, the leaning of the new voting members (hawkish or dovish) has the potential to alter the landscape for policy speculation. The markets have heavily speculated the pace of policy through 2017 and beyond. In fact Fed Funds futures still show significant speculation of three and even four further hikes this year. The views of the new FOMC members should be watched closely as a shift in policy outlook has the potential to alter the course and intensity of the US Dollar’s trend. 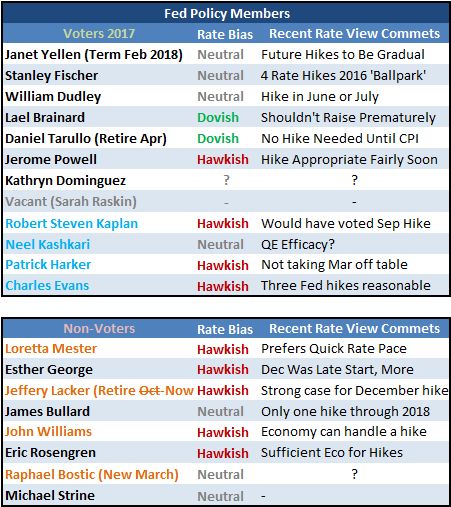