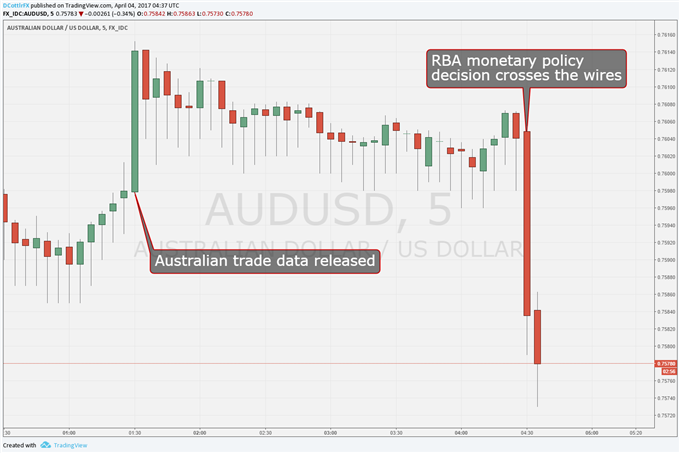 The Australian Dollar dropped sharply on Tuesday after its home central bank left interest rates on hold, but worried again about what currency strength might mean for the economy.

The Reserve Bank of Australia had been universally expected to leave rates alone at their 1.5% record low, a low which has endured since August 2016, and so it did. However, in a statement accompanying the decision, Governor Philip Lowe once again said that an appreciating currency would “complicate” the country’s “economic adjustment”.

The adjustment he referred to is the transition to an economy less reliant on mining and raw-material exports, and comments such as this are far from new. Indeed, RBA officials seem to lose no chance to make them. Still, AUD/USD took it badly this time, slipping to 0.75816 in the immediate aftermath of the policy decision, from 0.76069 immediately beforehand.

Aspects of the Australian economy have been strong, notably its international trading position from which more good news came earlier Tuesday. However consumer prices remain relatively subdued, and the balance of economic opinion is that while base rates may fall no further this year, they may not rise either, possibly well into 2018.

The RBA forecasts that headline inflation will rise above 2% over the course of this year.Lowe also noted that home-lending growth was outpacing that of income, and again enjoined banks to make sure that lending metrics were appropriate.

Turning to key trading partner China, Lowe said that growth there was supported by higher infrastructure spending. But he also noted a “rapid increase” in borrowing and said that medium-term risks to Chinese growth remain.

Would you like to know more about financial market trading? The DailyFX Trading Guide is all yours.