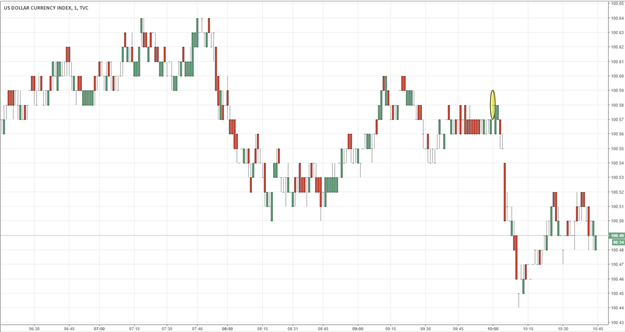 US Dollar Flat After ISM Manufacturing Comes in As Expected

- ISM Manufacturing comes in as expected at 57.2.

The US economic data began on a quiet note in April with Institute Supply Management (ISM) Manufacturing. The headline figure came in as expected at 57.2 vs 57.7 in February. ISM Prices Paid and Employment drew a bigger surprise. Prices paid came in at 70.5 versus 66.0 expected and employment came in at 58.9 versus 54.2 in February.

The ISM Manufacturing Survey reflects business conditions in the US. It includes key subcomponents, which are ISM’s Prices Paid and Employment. These key components provide significant economic health indications considering they precede other market data such as, Non-Farm Payrolls and the Consumer Price Index. The headline figure is expressed as a index based on survey responses. The ISM manufacturing indicator is the aggregate of the results for all categories.

As stated previously, March ISM Manufacturing left no surprise for traders. With that said markets can speculate which direction sentiment will be heading as 2Q begins. Since manufacturing ticked 0.5 lower this may be an indication that overall sentiment is weakening given the absence of strong hard data in 1Q.

Here’s a summary of the ISM data that is having a limited impact on the US Dollar:

As shown in the 5-minute chart above, the ISM Manufacturing release did not garner much reaction in the US Dollar. Leading up to the data print DXY traded at 100.56 and ticked up to 100.58 shortly after. At the time that this was written DXY traded lower at around 100.47.