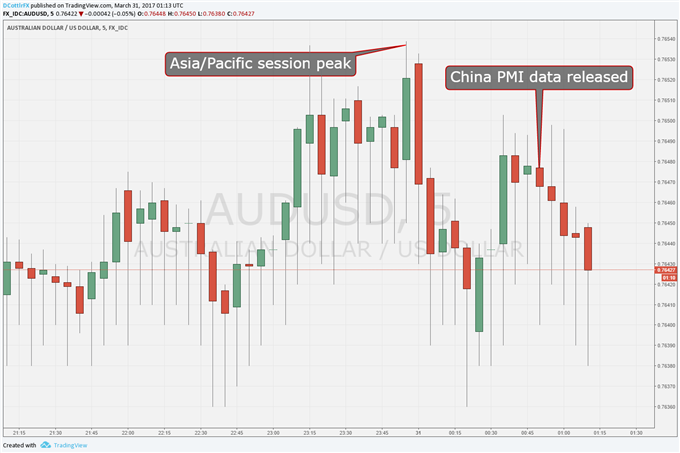 The country’s Purchasing Managers Index (PMI) rose to 51.8 in March. That was only an incremental notch above both the 51.7 expected and February’s 51.6. Still, it was enough to see the series make a new, near-five-year high. April 2012 was the last time we’ve been up here.

The non-manufacturing PMI was released simultaneously, but tends to carry a lot less weight in the markets despite China’s increasing reliance on that part of its economy. It came in at 55.1, well above February’s 54.2.

PMIs originated in the US, but are now released worldwide and regarded as among the more timely economic indicators. In their logic, any reading above 50 signifies expansion for the sector in question. A sub-50 print means contraction.

The Australian Dollar can often act as the markets’ liquid China proxy bet, thanks to its home nation’s huge raw-material exports to the world’s number-two economy. It didn’t do so obviously in this case though. AUD/USD continued to meander lower. It was at 0.76423 just after the numbers, from 0.76484 just before.

However, it was already retracing from the Asia/Pacific morning peak of 0.76538, stuck much earlier.

While these latest PMIs certainly add to many we have seen out of the region suggesting that economic recovery has traction, the markets are keeping at least half an eye on the White House’s view. The administration of President Donald Trump has barked angrily at countries which run persistent trade surpluses with the US. Although it has yet to bite, investors still worry that it might and China has by far the highest.