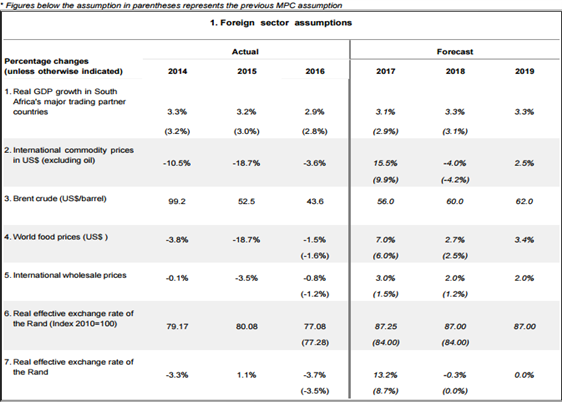 - USD/ZAR continues to rally as SARBstays on the sidelines amid improved near-term inflation outlook.

The South African Reserve Bank decided to hold the repurchase rate steady at 7.00% on Thursday marking one year since the SARB’s last rate hike. The Monetary Policy Committee (MPC) reasons that a lack of evidence of demand pressure is likely to decrease inflation.

Additionally, the MPC is “concerned that increased political uncertainty could impact negatively on private sector investment andhousehold consumption expenditure, and further undermine employment growth.” Surprisingly, one member of the committee favored a 25 basis point reduction. Below is a table that shows the SARB’s foreign sector assumptions as well as inflation forecasts.

The MPC lowered their near-term core and headline inflation expectations for 2017 and 2018 coming after a narrow CPI print in March. The SARB’s sole mandate is to “achieve and maintain price stability in the interest of balanced and sustainable economic growth in South Africa.” With that said, it is unlikely that the SARB will begin to normalize rates within the coming quarters.

As per SARB assumptions, Brent crude is expected to rise to $56/bbl by the end of 2017 and $60/bbl at the end of 2018. This may be optimistic as bullish runs in crude have not been sustained due to US Shale drillers undermining OPEC output cuts.

The MPC acknowledged that South African Rand strength against the US Dollar surpassed the level implied in their forecast. They stated, “The possibility of significant overshooting of theexchange rate in the short run also cannot be ruled out.” With the SARB leaving rates unchanged, they implied that Rand strength would keep inflation in line despite higher energy costs (according to forecasts).

The USD/ZAR exchange rate dipped lower following the SARB rate decision and found support at around 12.817. At the time that this was written USD/ZAR traded around 12.838 heading back towards the intraday support level.

While there was a rebound this week, the broader outlook for USD/ZAR is still in play. So far the US Dollar does not look poised to bounce back above the 2011 trend line that was broken back in January.