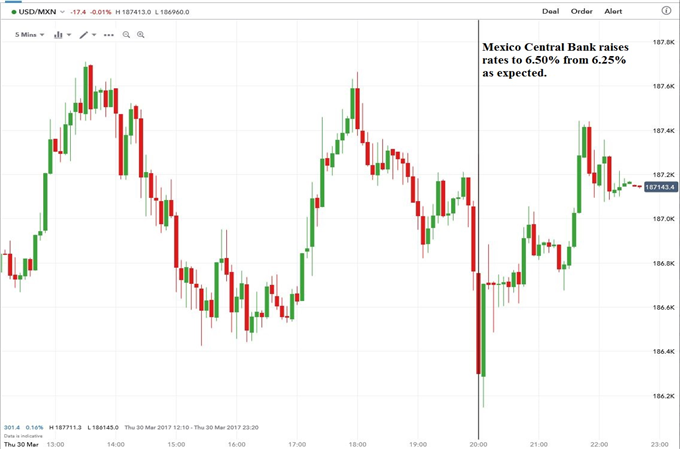 The Mexican Peso climbed to session highs against the US Dollar as the Bank of Mexico lifted its key rates by 25 bps in order to fight continuing inflation concerns. In the first two week of March, the bi-weekly CPI rose to 5.3 percent year-over-year (y/y). That is the series’ fastest pace since July 2009 and well above the central banks 3.0 percent y/y target.

This marks the fifth straight rate hike in the Bank of Mexico’s tightening cycle. Yet, with headline inflation so far above the central bank’s goal, a 25 bps hike - compared to 50 bps hikes in the last four meetings - seems comparatively moderate. This could potentially signal that Mexico’s Central Bank is looking to ease out of policy tightening.

As with the last meeting, this meeting’s decision to hike was unanimous. This seems to indicate the central bank feels it important to remain in-line with Fed’s moves and developments in the US economy. In their official statement the Bank of Mexico cited their decision was in part due to strengthening global economic activity, in particular an expanding US economy.