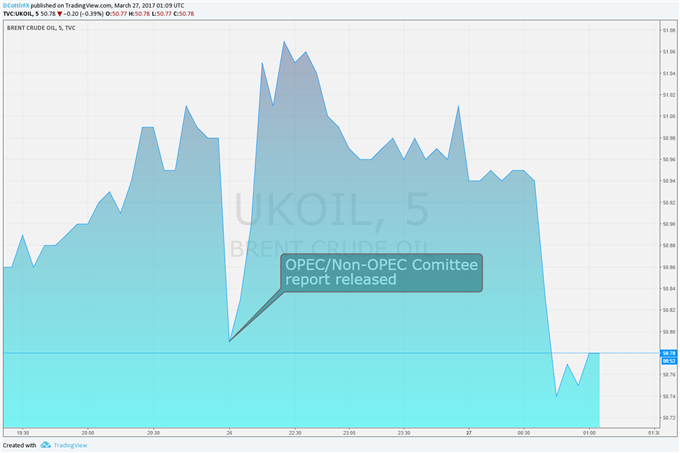 Crude oil prices rose on Sunday and into Monday’s Asia session on hopes that historic production cuts might be extended, but then slipped back when it became clear that such a move was not likely very soon.

A joint committee of producers from within and outside the Organization of Petroleum Exporting Countries (OPEC), has agreed to review an extension of last year’s agreement to cut production by six months.

An earlier draft of the statement had said that the committee reported a “high level of conformity” and “recommends” a six-month extension. The final version merely said that there would be a review of oil market conditions and another meeting on the subject on April 17.

The reason for this change of wording was not immediately clear.

OPEC and eleven other leading producers agreed late last year to cut their combined output by almost 1.8 million barrels per day in the first half of 2017. The original deal had a six-month lifespan, with the possibility of an extension. It has taken crude prices above $50/barrel, but they don’t look comfortable there, especially as US shale-oil production rises. This increases the very supply glut that OPEC and others had hoped to limit.

In any case the lack of an immediate extension to the output cut has weighed on oil prices as a new week gets under way in Asia. International benchmark Brent crude got up to $51.07 as the report was released but has since slipped back to $50.78.

Would you like to get live, interactive coverage of major, market-moving economic news? If so the DailyFX webinars are for you.