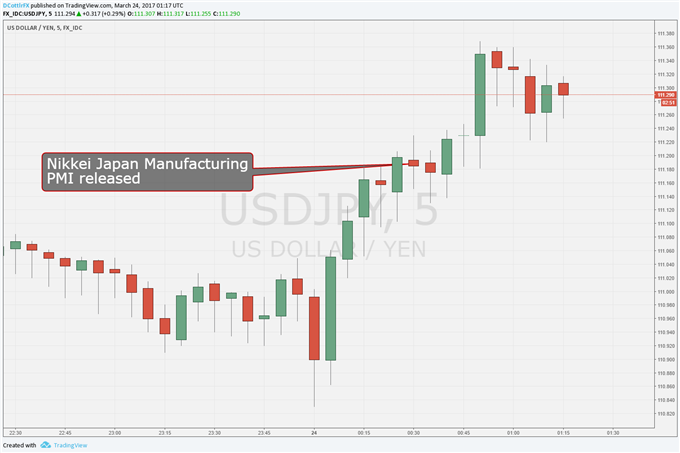 The Japanese Yen continued to slip against an already resurgent US Dollar Friday after a key indicator of Japan’s manufacturing performance slowed.

The preliminary or “flash” Nikkei Manufacturing Purchasing Managers Index (PMI) for March came in at 52.6. That marked a three-month low for the series, although growth remains quite strong. February’s print was 53.3.

Originating in the US in 1948 and based on a series of questions sent out to participating firms, PMIs are now held to be timely, globally comparable surveys of economic activity. In their logic, any reading above 50 denotes expansion in the sector under scrutiny. A sub-50 print means contraction.

Behind the headline Japanese figure, most of the sub-indexes which contribute to it actually gained, from output and new orders to employment and backlogs of work. IHS Markit compiles the data for Nikkei said that expansion continued, simply at a slower pace.

Indeed, the PMI points to a Japanese manufacturing economy expanding at a “decent clip,” IHS Markit said. However, it did caution that new order books seem to be supported by a weaker Yen, which is in turn pushing up manufacturers’ costs. Inflation of these so-called input prices remains close to two-year highs.

USD/JPY was already staging something of a fightback as Asian trade got under way. Having formed a base at 110.83 earlier, it continued to rise after the PMI release to hit 111.24.

An earlier release from the Reuters media group found Japanese manufacturers’ confidence at a three-year high in March. However the PMI data seem more in tune with the more cautious optimism evinced by the latest official report on Japan’s economic performance.

The first quarter of 2017 is nearly over. How are the DailyFX analysts’ forecasts bearing up?