- USD/ZAR at risk of facing increased volatility should SARB show a greater willingness to move from the sidelines.

South Africa’s Consumer Price Index (CPI) was largely in-line with market forecast as the headline reading narrow to an annualized 6.3% in February versus 6.6% the month prior. Annualized core CPI came in surprisingly lower than estimates at 5.2% per annum amid projections for a 5.4% print. The disconnect between the headline and core reading can be attributed to higher costs for food, transportation, and miscellaneous goods and services which rose 9.9%, 7.2%, and 7.4% respectively. These three items make up nearly 47% of the indicator. Below are tables that show the respective weights of each item in the index. 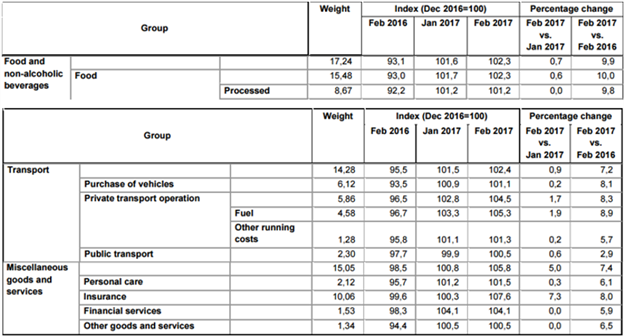 The SARB’s sole mandate is to “achieve and maintain price stability in the interest of balanced and sustainable economic growth in South Africa.” In January their efforts to control inflation were unsuccessful. As per the statement released by the Monetary Policy Committee back in January, “… the near-term inflation outlook has deteriorated… The expected inflation profile has been negatively affected by higher international oil prices and a persistence in elevated food price inflation.” Currently, the SARB’s forecast for 1Q headline and core inflation is at 6.6% and 5.5% respectively.

With that said, the South African Reserve Bank (SARB) faces a tough call at the end of the month especially as the Federal Open Market Committee (FOMC) appears to be on course to further normalize monetary policy in 2017. On March 30th, the SARB is expected to keep the benchmark interest rate on hold at 7.00%. The CPI data from February suggests that the SARB’s efforts to curb inflation is starting to bearing fruit and may encourage the central bank to retain the status quo for the foreseeable future as transitory factors largely drive the recent pickup in price growth.

The USD/ZAR exchange rate dipped lower following the mixed CPI prints, but the market reaction was short-lived, with the pair largely consolidating within a narrow range.

Nevertheless, the broader outlook for USD/ZAR has gained increased interest as the pair appears to on the cusp of a larger move.