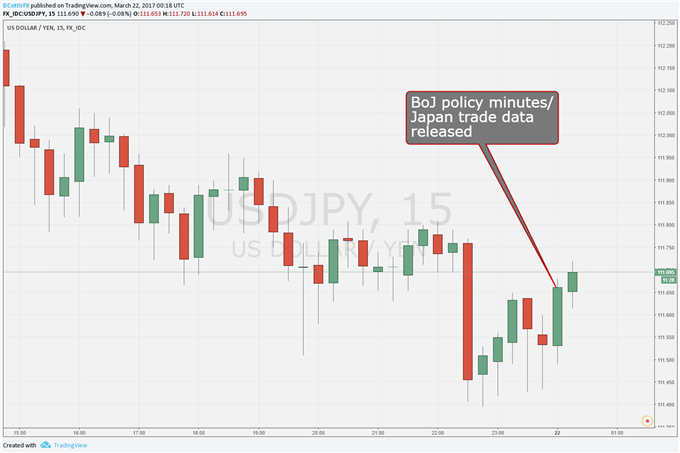 The Japanese Yen steadied against a broadly weaker US Dollar Wednesday following the release of policymakers’ minutes from the Bank of Japan’s January policy meeting.

The BoJ left all its policy settings unchanged at the meeting, as it was expected to do, and the minutes offered markets little in the way of new insight. Most members of the Monetary Policy Committee agreed that the longed-for price momentum was not yet firm in Japan, the minutes showed. One ray of hope for the MPC was the belief that companies were likely to raise prices as consumer spending increases.

Some members noted speculation in the markets that the BoJ might raise interest rates in response to rising Treasury yields as the US Federal Reserve does the same. Attempting to quash this speculation, those members said that the central bank should focus solely on achieving its target of a 2% rise in consumer prices.

That target remains as elusive as ever, however, with the most recent data indicating a 0.4% annualized gain.

MPC members agreed that the Japanese government-debt yield curve was smooth under its newish policy of yield-curve control.

The minutes are possibly a little historic now in any case given that we have already had the BoJ’s March policy conclave, at which the monetary settings were once again left alone.

USD/JPY ticked up after the two economic releases, rising to 111.70 from 111.40 just before. However the pair had been falling for some hours previously as doubts about President Trump’s economic agenda hit Wall Street hard and fueled general US Dollar weakness.

Finding a base? USD/JPY

The first quarter of 2017 is nearly over. How are the DailyFX analysts’ forecasts bearing up?