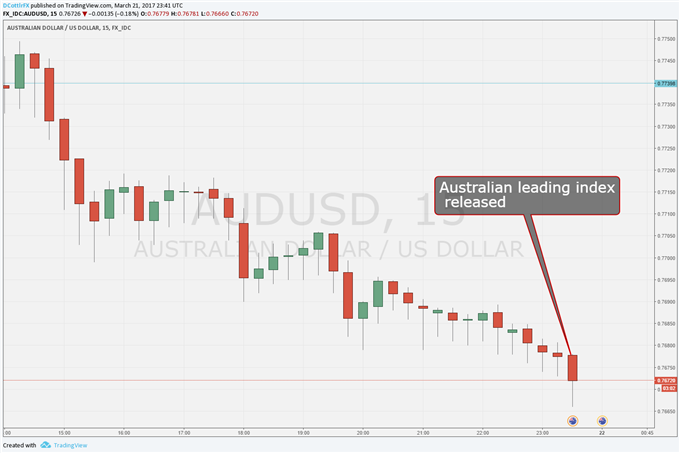 An already weakened Australian Dollar slipped a little further on news that a key leading indicator of its economic health had contracted.

February’s leading index from major local lender Westpac and the Melbourne Institute came in at -0.07%, having been flat the month before. The indicator aggregates nine sub-indexes which in turn register the performance of such timely indicators as commodity prices, yield spreads, total hours worked and house-purchase approvals.

The six-month annualised growth rate (which indicates the likely pace of economic activity relative to trend three-to-nine months down the track) fell from 1.34% in January to 1.02% in February. Westpac said that the index overall does raise questions about the sustainability of Australia’s growth, given that the bulk of its momentum seems to be coming from only two areas: commodity prices and bond-yield spreads.

The data suggest an Australian economy that is struggling for real traction, despite the modest optimism of policy makers such as those at the Reserve Bank of Australia. AUD/USD slipped to 0.76608 after the release of the index, from 0.76767 before it. However, it had already fallen from 0.77570 in the preceding few hours against the US Dollar.

Reports have suggested that traders are increasingly worried about housing-market froth. Prices were revealed Monday to have surged ahead of expectations in the last quarter of 2016. Prices for Australia’s major commodity export iron ore also retreated this week as investors suspect that China’s inventory rebuild is losing pace. This is also likely to have hit the Aussie.

Would you like to know more about financial markets, or to get live commentary on major economic events? Check out the DailyFX webinars.