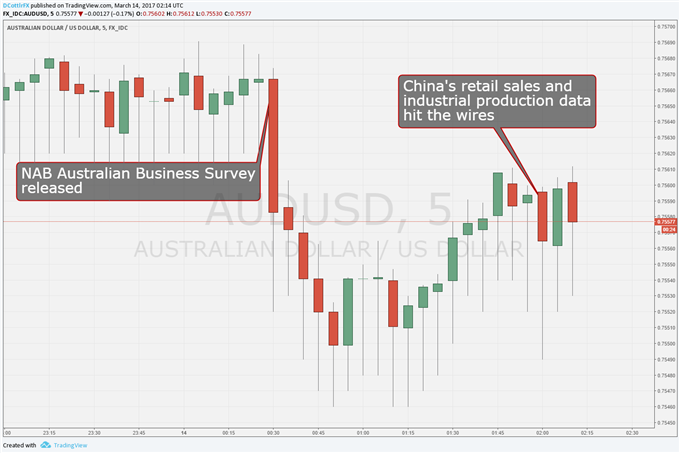 The Australian Dollar was little moved Tuesday by a run of Chinese economic data which on balance left investors little the wiser about the world’s number two economy.

Retail sales rose 9.5% for the year to end-February, compared with the same period in 2016. That was some way below both January’s 10.4% gain and the 10.6% rise which markets had expected. However, the series has likely seen some impact from the early timing of the long Lunar New Year break and so economists may wait to see more data from this sector.

Industrial production numbers were released simultaneously and they managed to beat expectations, if not by much. Their 6.3% annualized gain was a whisker better than the 6.2% rise expected, but rather further above the previous 6% rise.

The Australian Dollar can often act as the foreign exchange market’s favorite liquid China proxy but there’s little sign that it did so on this occasion. AUD/USD had slipped earlier following the release of weaker Australian business confidence numbers from local lender NAB. However, it did little after these latest Chinese data and merely hovered around the 0.75590 point.

Nothing Much To See Here. AUD/USD

The Aussie market like all others is focused on the US Federal Reserve. The central bank will set monetary policy this week at a meeting widely expected to conclude with an interest-rate hike.

Last week’s official US labor data were seen in the markets as the final barrier to a move. In the event non-farm payrolls rose strongly. Meanwhile Australian interest rates are seen on hold, possibly for the remainder of this year and into next.

What does the market think about your favorite currency? The DailyFX sentiment page can tell you.