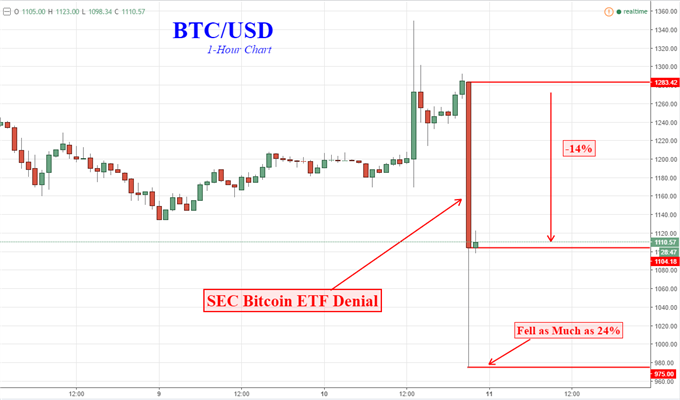 The markets were delivered a shock of volatility towards the end of the trading week as the Securities and Exchange Commission (SEC) rejected a Bitcoin-based exchange-traded fund application (ETF). As the news crossed the wires, the digital currency fell as much as 24 percent against the US Dollar in the space of minutes, touching a one-month low. It quickly pulled back from its extremes to trim some of its losses, leaving a 1-hour candle that offered a 14 percent contraction.

In terms of what the group requires for ETF applications to be approved, the SEC upholds that the product in question must be consistent with rules designed to prevent fraudulent and manipulative practices to protect investors and the public interest. Having said that, the commission noted that because significant markets for Bitcoin are unregulated, the exchange wouldn’t be able to perform sufficient surveillance.

As Chief Currency Strategist John Kicklighter mentioned in previous analysis, one of the fundamental drives for Bitcoin is its value as an alternative to traditional fiat currency – a role benefited by the lack of regulation. Fiat money is defined as being a unit of account, store of value and medium of exchange. The SEC’s decision is a step away from boosting the legitimacy of the new asset which could subsequently bolster liquidity to the digital currency. Yet, despite the setback, Bitcoin remains the most liquid of the cryptocurrencies.

Moving forward, Bitcoin traders and users will weigh this development in terms of its long-term adoption and development. Inclusion in popular financial products like exchange-traded products isn’t the only path to prominence for this alternative asset. It continues to enjoy considerable appeal amongst global participants looking to circumvent capital controls. This value lead the Bitcoin to its first true surge in 2013 when Cyprus cut off fund withdrawal of locals and foreign investors offshoring capital in the country. China has become the most recent test of this back channel asset. However, authorities in the financial power house of taken considerable steps these past weeks to rein in Bitcoin exchanges.