The President of the ECB, Mario Draghi, acknowledged today that short-term German government debt is out of sync with fundamentals, with two-year issues still trading at close to all-time-low negative yields. The ECB president said the central bank is carefully monitoring the “distortions” in the market. The German two-year Schatz currently trades at -0.85%, effectively meaning that customers pay for the privilege of lending money to the German government over the life of the bond.

The German government bond has long been considered the ultimate Euro-Zone fixed-income safe-haven of choice for European investors, forcing yields steadily lower and into negative territory. Aside from the market liquidity, investors have cited re-denomination risk as one reason for holding German paper, arguing that in the, very unlikely, event of the Euro-Zone breaking up, German bonds would be re-denominated back into Deutsche Marks, with the currency expected to appreciate sharply. German debt was also given an additional boost when the ECB bond-buying program recently started buying bonds under its -0.40% yield threshold, driving yields further into negative territory, aided in part by a lack of available bonds. 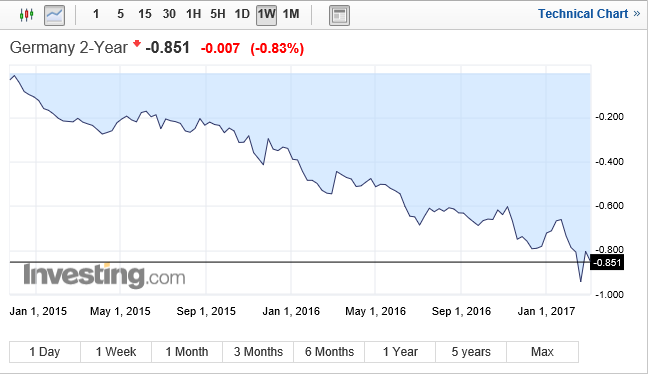 Further along the yield curve, the 10-year German Bund has seen its yield rise in recent weeks, dragged higher by rising US 10-year rates and the backdrop of rising domestic inflation. The 10-year Bund hit an all-time low yield/price high of -0.185% in July 2016 and has been steadily moving higher to a current level of 0.43%. This rise will have pleased the German government, which is starting to become more vocal about the ECB normalizing monetary policy, arguing that the single currency is too weak for Germany and importing inflation. 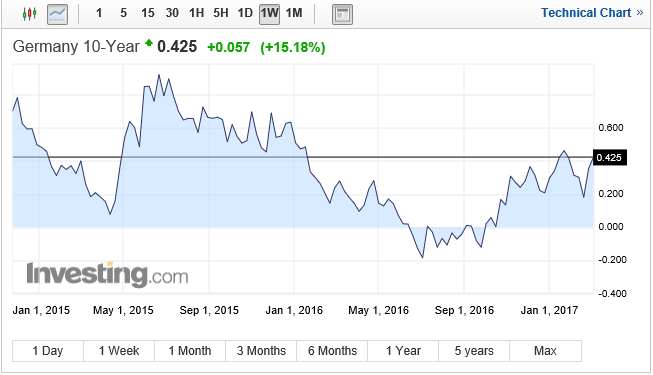 The 2s-10s spread is now trading at 126basis points, its widest level since 2014, and may widen further as European growth firms. Euro-Zone GDP rose by 1.7% y/y in Q4 2016 and the central bank expects growth to nudge a fraction higher to 1.8% in 2017. At today’s monetary policy meeting, President Draghi also said that the central bank saw risks to the Euro-Zone growth outlook as “less pronounced” although headwinds remain due to global factors.

A supply/demand imbalance and safe-haven buying at the short end of the German curve should keep rates near historical lows for the time being, while a combination of higher US 10-year rates and a slightly more upbeat outlook for Euro-Zone growth should push 10-year Bund yields higher, widening the spread even further.

A steeper German yield curve should also help underpin any rise in the EUR, especially against GBP and JPY, who both have similar interest rate outlooks and ongoing bond buying programs.