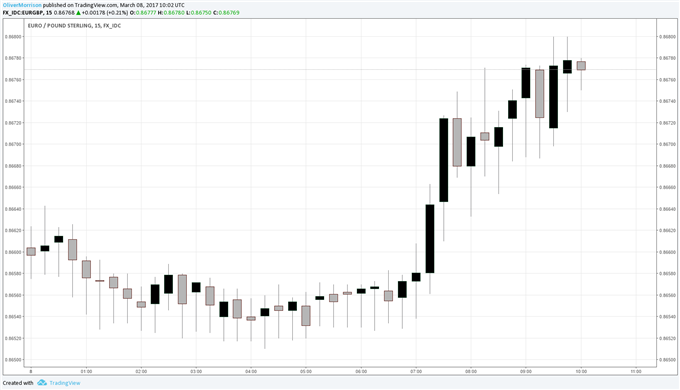 - That’s the best performance since August 2016.

The Euro strengthened in early European trading Wednesday after data showed German industrial production, which makes up 30% of the Euro-Zone’s largest economy, grew at its quickest pace in January since August last year.

The sector expanded 2.8% in the month, according to official data from the Federal Statistical Office (Destatis), bouncing back from the revised 2.4% drop in December, and slightly higher than the 2.7% market estimate.

Destatis said the drop in industrial production in December was a blip, likely caused by factories closing due to poor weather. It added that the positive momentum was likely to build in the coming months.

The Euro has been in a tight range versus the US Dollar, but the strength gained on recent positive data from the Euro-Zone has been evident against the British Pound, which is being held back by weak data and Brexit uncertainty.

EURGBP has gained a further 0.0015 in early Wednesday trading to reach 0.8676. No one, however, at this stage expects the European Central Bank to drop its interest rate easing bias when it announces a policy decision tomorrow.