- The Paris-based think tank reckons the expected rise in US interest rates could increase market volatility.

- It also sees rate increases boosting the US Dollar.

Higher interest rates in the US could unleash damaging volatility on financial markets for some borrowers while potentially pushing the Dollar higher, according to the Paris-based Organisation for Economic Co-operation and Development.

Publication of the OECD’s March global Interim Economic Outlook, entitled Will risks derail the modest recovery? comes as the CME Group FedWatch tool calculates that there’s an 84% probability that the Federal Reserve will increase its interest rate target by a quarter of a percentage point to the 0.75%-1.00% range this month and a 40% probability of another quarter-point rise by June.

“Financial market expectations imply that a large divergence in short-term interest rates between the major advanced economies will open up in the coming years. This raises the risk of financial market tensions and volatility, notably in exchange rates, which could lead to wider financial instability,” the think tank argues.

Moreover, “financial vulnerabilities and policy risks could derail the modest [global economic] recovery,” writes the OECD Chief Economist Catherine Mann. “There are apparent disconnects between the positive assessment reflected in financial market valuations and forecasts for the real economy. For example, equity prices have increased significantly over the past six months, despite the large rise in nominal interest rates and with long-term real GDP growth and inflation expectations barely changed,” she adds.

In its report, the OECD writes that global economic growth is expected to pick up modestly next year to around 3.6 % from a projected 3.3% in 2017 but risks of rising protectionism, financial vulnerabilities, potential volatility from divergent interest rate paths and disconnects between market valuations and real activity hang over the outlook. 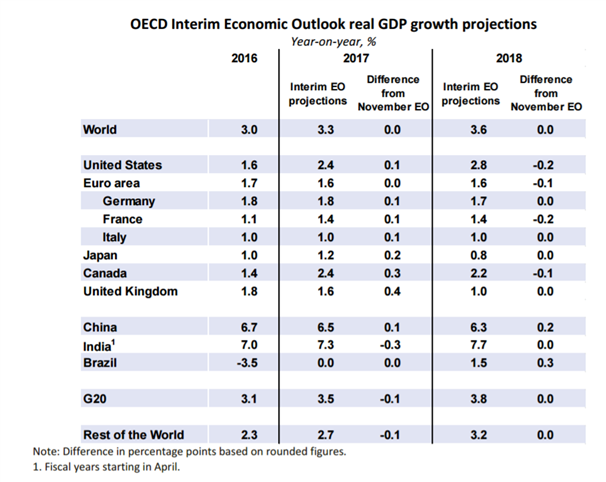