- Non-food sales drop for first time since 2011 in the three months to end of February.

The British Pound is under pressure in Tuesday trading on mounting evidence that the hit to consumer spending growth from higher inflation caused by Sterling’s Brexit-related slump is starting to be felt on the British high street.

UK retail sales softened in February, according to data from the British Retail Consortium released overnight, with non-food sales falling on an annual basis for the first time since 2011 in the three months to the end of February.

The BRC said total sales rose 0.4% in value terms in February compared with the same month last year. That was above the 0.1% rise in January but below the 12-month average of 0.9%. On a like-for-like basis -- which excludes new store openings -- sales dropped 0.4%, smaller than January's drop of 0.6% but the first back-to-back two-month dip since March and April last year, and missing markets expectations of a fall of 0.2% in February.

BRC chief executive Helen Dickinson said the persistent weak sales performance of several non-food categories points to an undeniable trend of cautious spending on non-essential items. "Tougher times are expected ahead. The impact of inflation on consumer spending will add further intensity to an already fiercely competitive environment,” she said.

Paul Martin, head of UK retail at KPMG, which produces the figures along with the BRC, said: “Evidently, February was yet another challenging month for the majority of retailers. Food sales, however, continued to buck the general trend by remaining in the black. That said, with inflation starting to have an impact on retail performance, it is clear that consumer confidence is showing signs of deteriorating.”

Barclaycard also reported signs of weakening demand for more expensive items. Its consumer spending survey released Tuesday revealed the biggest rise since at least 2012 in spending on essential items, which pushed up its measure of consumer spending by 4%. But spending on non-essential items slowed for a fifth month in a row. Paul Lockstone, managing director at Barclaycard, said: “Rising prices were at least in part responsible for the highest growth in spend on essentials in nearly five years, with the phenomenon of ‘shrinkflation’, where people get less product for their money, also prompting consumers to rein in on some areas of discretionary spending.”

Housing market data also released Tuesday also point to a slowdown in households’ income constraining the housing market. House prices rose by 0.1% month-on-month in February, according to Halifax, a building society, below the consensus of 0.4%. The three-month average of year-over-year growth in prices fell to 5.1% from 5.7% in January, also below the consensus figure of 5.3%. This ties with the recent survey from its rival Rightmove, which said asking prices rose 2.3% in February compared to 3.2% in January, the lowest rate since April 2013, from 3.2% in January.

The Bank of England can be expected to take note of these trends. If weakening consumer spending points to slower growth, the Bank is highly unlikely to alter its ultra-accommodative policy stance. Official figures published last month revealed retail sales fell for a second consecutive month in January, and that the fall was much larger than analysts had expected. MPC member Charlotte Hogg recently suggested a sharp drop in consumer spending posed “some of the biggest risks” to the UK economy.

Brexit uncertainty is also weighing on Sterling. Today is the last day when the governments Brexit Bill is debated in the House of Lords, when the peers debate the final wording of the bill and vote on any possible amendments. These amendments go back to the House of Commons for its approval. The bill is passed back from house to house – the so-called ‘ping-pong’ period until they both agree on the details of the bill. There is no exact timeline for this, though the Lords expects to send the bill to the Commons for the final time on the week of March 13. The government has said it will vote down any amendments and that it will trigger the Article 50 formal departure by the end of March. 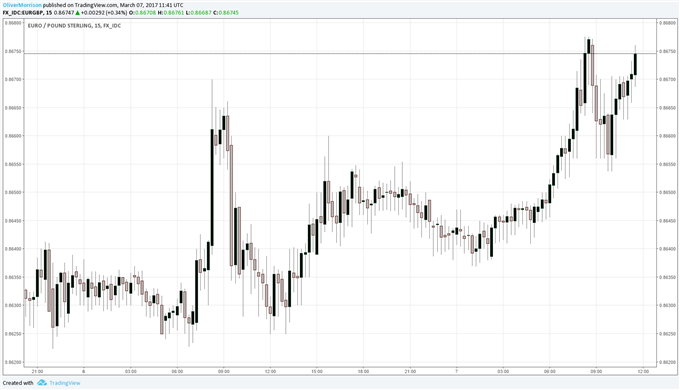