- Services PMI also rises to highest level since May 2011.

- EURUSD and EURGBP both rise; but ECB unlikely to be swayed when it meets next week.

The Euro has risen slightly versus the Dollar and British Pound after the final Euro-Zone PMI revealed that economic growth in the region rose to a near six-month high in February.

The final Markit Eurozone PMI Composite Output Index rose to a 70-month high in the month and was unchanged from the earlier flash estimate of 56.0, up from 54.4 in January.

Growth was led by the manufacturing sector, with improved inflows of total new orders and new export business driving expansion in manufacturing production to its highest since April 2011. Momentum also improved in the service sector, with business activity rising to the greatest extent for over five-and-a-half years. The final Markit Eurozone PMI Services Business Activity Index rose to 55.5, its highest level since May 2011 but slightly below the earlier flash estimate of 55.6.

National data signalled that Ireland remained at the top of the Composite PMI output growth rankings. All of the ‘big four’ economies reported stronger increases in output. Growth hit an 18-month high in Spain, a 34-month high in Germany, a 69-month peak in France and was the sharpest since December 2015 in Italy.

EURUSD has risen 0.0012 to 1.0518 in early Friday trading. EURGBP is also up 0.0034 to 0.8601. However, the upbeat economic data are unlikely to sway the European Central Bank, which announces a rate decision on Thursday, from its ultra-loose monetary policy, especially as core inflation still lags.

What’s more, the single currency remains at the mercy of political uncertainty in the region. Elections are looming in the Netherlands, France and Germany this year -- there could also be an election in Italy following Prime Minister Matteo’s resignation -- with markets nervous about the rise of far-right populism in Europe. It is also highly possible that Eurozone growth will be negatively hit as the UK triggers Article 50 (the British government is aiming to do this by the end of March) and negotiations begin on the terms of the UK’s divorce from the EU.

Traders will now look to Monday when key European national government heads are set to meet. 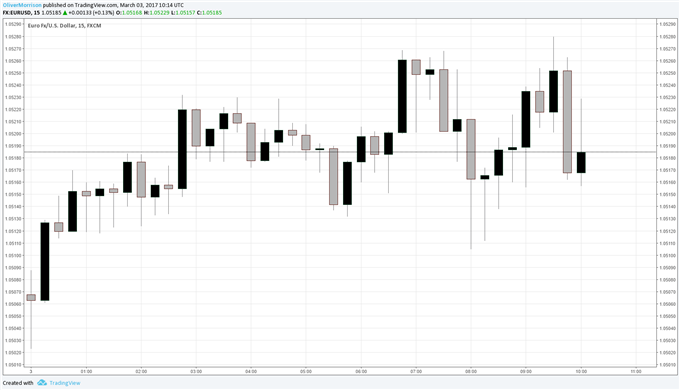