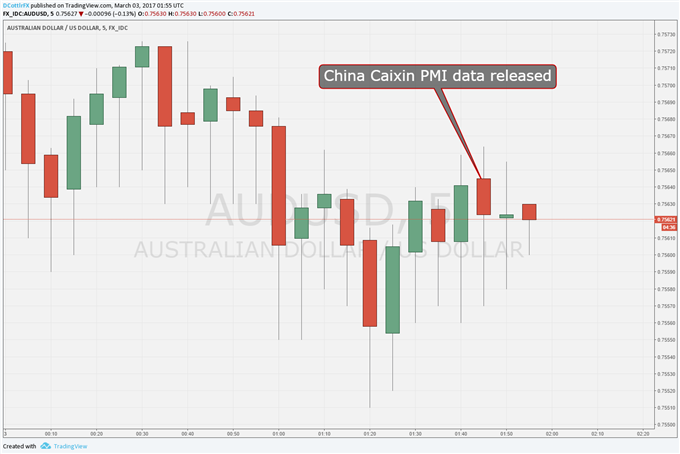 The Purchasing Managers Index for the service sector from Chinese media company Caixin and western research firm Markit came in at 52.6, below January’s 53.1. Taken together with Caixin’s manufacturing PMI, released on Wednesday, that yielded a composite score of 52.6, which is a little above January’s 52.2

In the logic of PMIs any reading above 50 signifies an on-month expansion in the sector in question. A reading below that means contraction. The report noted, that while manufacturing expansion had picked up pace, service sector growth softened slightly. Inflationary pressure continues to ease, though it went on, while employment across all sectors rose for the first time since May, 2015.

All up this was a ‘steady as she goes’ snapshot of the Chinese economy, and markets seem to have taken it as such. The Australian Dollar often acts as a liquid proxy for China given its home nation’s huge raw material export links with that country. This time however there was very little reaction to the data. AUD/USD stayed put around 0.75630.

Like most other markets the Aussie focus is squarely on the US and the apparently rising chance of an interest-rate rise there this month. One Federal Reserve speaker after another seems to be priming markets for this.

Caixin provides an alternative reading from China’s official PMI releases, at about the same time. It concentrates on smaller, private business rather than the state-controlled giants which make up much of the official data.

We’re well into the year’s first quarter, how are DailyFX analysts’ forecasts holding up?