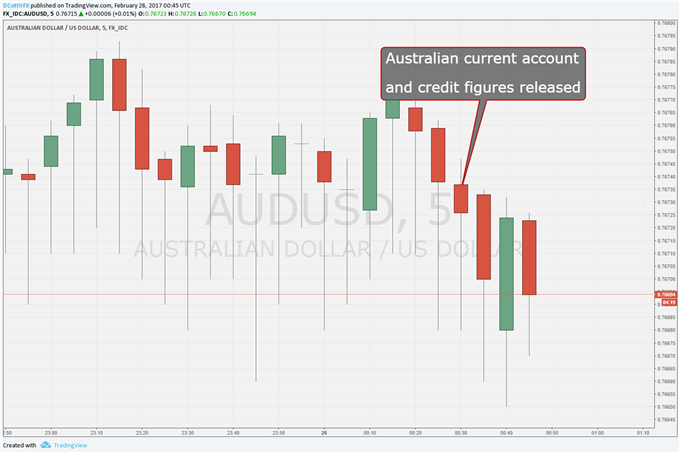 The Australian Dollar slipped a little on Tuesday following the release of data showing a modestly smaller current account deficit than had been expected, but it’s unlikely that the numbers had much impact on the currency.

The deficit hit A$3.9 billion (US$2.99 billion) in the final quarter of 2016, official figures showed. That was a little less than the A$4 billion gap which the markets had been looking for. It was also well below the A$11.4 billion short-fall reported for the third quarter and much the smallest deficit for 2016 overall.

The current account describes the flow of all goods, services income and transfer payments to and from Australia. The final quarter’s figures look good for the Australian economy as a whole, and may bode well for Wednesday’s official Gross Domestic Product data for the same period.

The Australian economy suffered a rare, shock contraction in the third quarter. But the data markets have seen since make it very likely that those baleful two straight quarters of contraction which signal technical recession will be avoided.

Still, AUD/USD slipped to 0.76651 after the data, from 0. 76737 just before them. The Aussie had been sliding in any case, and it’s unlikely that the current account data did what further damage there was. However, private sector credit figures for January were released simultaneously and they missed forecasts, if not by much.

Credit grew 0.2% on the month, when a 0.5% rise had been expected, and by 5.5% on the year, rather than 5.6%. These numbers look like a more compelling reason for AUD/USD’s fall but, in any case, the currency looks confined to its current ranges, as are most others. The markets are looking toward US President Donald Trump’s crucial policy speech to Congress later Tuesday.

Would you like to know more about financial-market trading? The Daily FX trading guide should be your first stop.