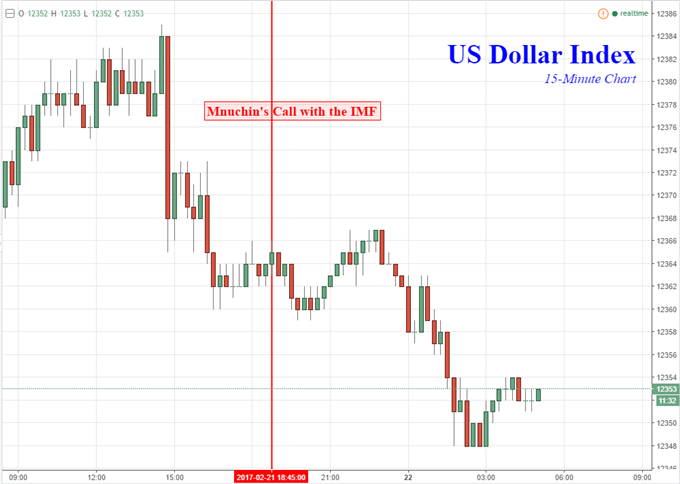 The newly confirmed U.S. Treasury Secretary Steven Mnuchin made a phone call to the International Monetary Fund on Tuesday. During that conversation with Managing Director Christina Lagarde, Mnuchin welcomed the key role the IMF plays in a variety of arenas, including the promotion of economic growth. He also noted that he looks forward to robust economic policy advice on the fund’s member states. Perhaps a bit ominously, Mnuchin concluded with a request for Lagarde to provide them with frank, candid analysis of the exchange rate policies of IMF countries.

Last week, the US Dollar endured mixed price action. It started off with a rally to its highest level in one month on hawkish Yellen comments and better-than-expected CPI figures. Then, it pulled back ahead of a G20 foreign ministers’ meeting. During this event, Donald Trump’s newly confirmed Secretary of State Rex Tillerson had a chance to channel his boss’s aggressive campaign rhetoric. However, the USD ended up rallying as the summit passed without much incident.

Like Tillerson, Steven Mnuchin also had the opportunity to express and reiterate Trump’s message to foreign officials. Some ofthese include accusing countries of manipulating their currencies to gain trade advantages, talking down the US Dollar and arguments with the ECB about bank regulation. As Senior Currency Strategist Ilya Spivak mentioned, unsettling news-flow from the Trump team may shatter a hopeful vision for rate hike bets. While the USD showed a tepid reaction to Mnuchin’s call, interpretationof his last comment on the evaluation of FX policies is up for grabs.