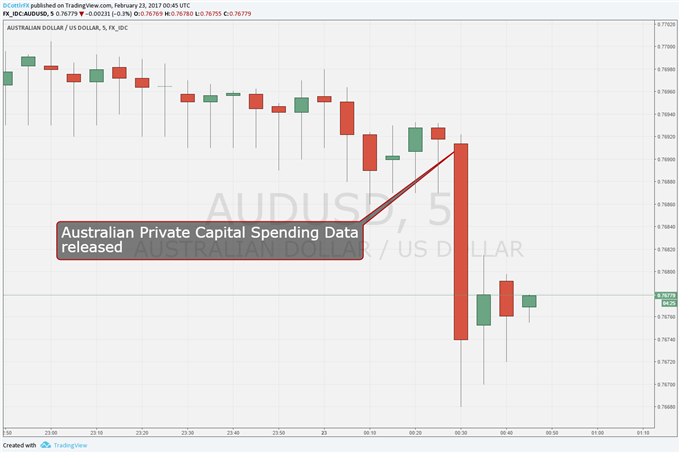 The Australian Dollar was clobbered Thursday following an unexpectedly weak reading on capital expenditure in its home country.

The official report of Private Capital Expenditure (PCE) for the fourth quarter of 2016 showed a fall of 2.1% compared with the third. This was much weaker than both the 0.5% fall expected and the previous quarter’s 0.4% slide.

As usual the data weren’t all bad. Yes, the trend for mining capex was reported to have slipped markedly in the fourth quarter. But manufacturing capex rose. Moreover, while PCE on buildings fell 4.1%, that was less than the previous report’s 5.7% slide.

Still, weaker overall capex is an economic negative because it implies that firms don’t see viable opportunities ahead. The first estimate for PCE in 2017/18 was A$80.6 billion, well below the A$84.8 billion expected.

The prevailing sentiment around the currency remains that, while record-low Australian interest rates may fall no further, they probably won’t rise anytime soon either. Speaking in Sydney on Wednesday, Reserve Bank of Australia Governor Philip Lowe seemed to reinforce at least the first half of this thesis. Responding to questions he reportedly said that still-lower interest rates probably weren’t needed now.

Indeed, he worried about the increased borrowing that more rate cuts would bring, given households’ already “sobering” debt levels.

The US Dollar meanwhile had been pressured broadly by the release of minutes from the Federal Reserves’ last monetary policy conclave. They revealed that many officials see a rate hike “fairly soon” if the economy continues to hold up. While that appears to leave a March move on the table, markets seem to have interpreted the minutes as less hawkish on this point than some of the Fed speakers we have heard since, and the greenback duly slipped early in Asian trade.

Would you like live reports of the main market moving stories of the day, or just to know more about financial market trading? Check out the DailyFX webinars.