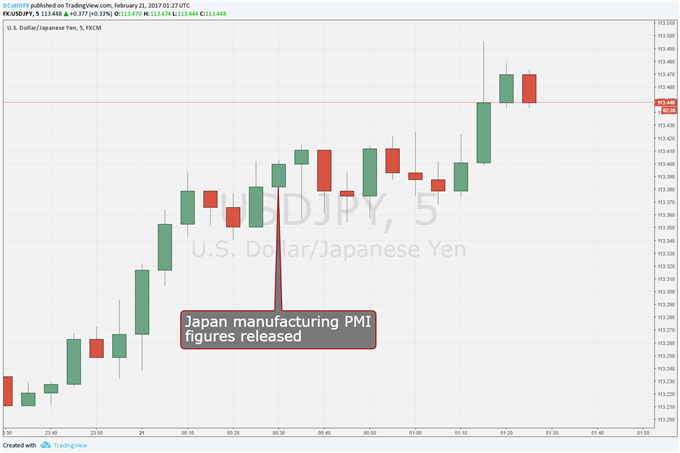 The Japanese Yen was only modesty stronger against the US Dollar on Tuesday, and not for long, despite an encouraging snapshot of Japan’s manufacturing sector.

The preliminary Nikkei Manufacturing Purchasing Managers Index (PMI) for February romped in at 53.5, a 35-month high and well above January’s 52.4. In the logic of PMIs any reading above 50 signifies expansion in the sector, a score below that means contraction.

Manufacturing output registered its fastest rate of growth for three years, coming in at 54.3, while business confidence levels were at record highs. The general aura of success seemed largely down to robust export orders and new product launches, as it was the month before.

USD/JPY was steady around after the figures, slipping very mildly to the 113.37 mark from 113.40 or so before the release. More broadly the market is focused on prospects of higher US interest rates based on the latest Federal Reserve commentary. This has favored greenback bulls, as have hopes for more expansive fiscal policy under President Trump, even if hopes is all they are at present.

Paradoxically, stronger Japanese data can sometimes count against the Yen, too. Given Japan’s huge national export machine, better manufacturing data can point to stronger global demand. This in turn tends to make Japanese investors search overseas for higher yielding investments than they can get at home.

Would you like live coverage of the biggest market-moving events? Why not check out the DailyFX webinars?