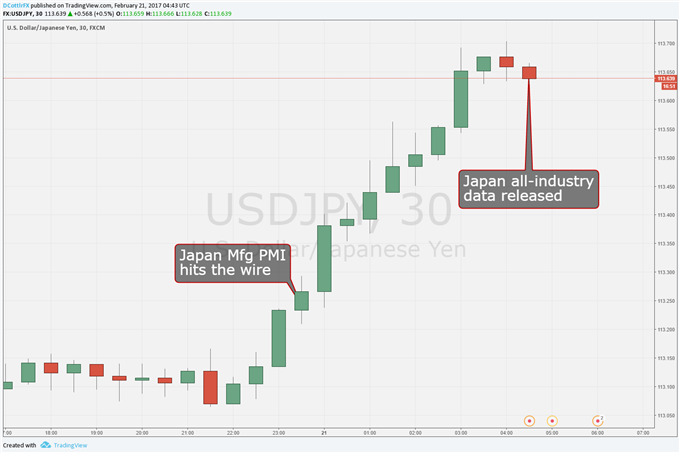 An important proxy for Japanese Gross Domestic Product growth came in below expectations on Tuesday, but any impact on the Yen was hard to spot.

The official all-industry activity index for December fell 0.3% from November. This was worse than the 0.2% fall expected and the previous month’s 0.4% gain (which was revised up from an initial 0.3% reading). The index measures the monthly change in overall production by all economic sectors.

But the US Dollar had been rising through Tuesday’s Asian session, and not just against the Yen. Investors suspect that higher US interest rates could be with us quite soon, and are looking toward the Donald Trump White House with renewed hope for expansive fiscal spending. Both factors are enough to set the Dollar bulls running.

USD/JPY has risen from around 113.14 to the 113.70 area through the session. Counterintuitively it actually ticked lower following the release of this latest data, but only by a very small amount. The Yen sometimes attracts a “haven” bid from Japanese investors even when local numbers are weak. However, the 113.70 level is a five-day peak so the greenback may simply need a little more impetus to get beyond it.

While that all-industry slip was a little disappointing, it’s also a little historic as it covers December. We already know that fourth-quarter GDP growth missed expectations, albeit not by much. Many of the data points released since have been a lot more upbeat, notably the manufacturing Purchasing Managers’ Index for February. That was released earlier on Tuesday and was near three-year highs.

Just tiring at the summit? USD/JPY

How are the DailyFX analysts’ forecasts for the first quarter bearing up? Check them out here.