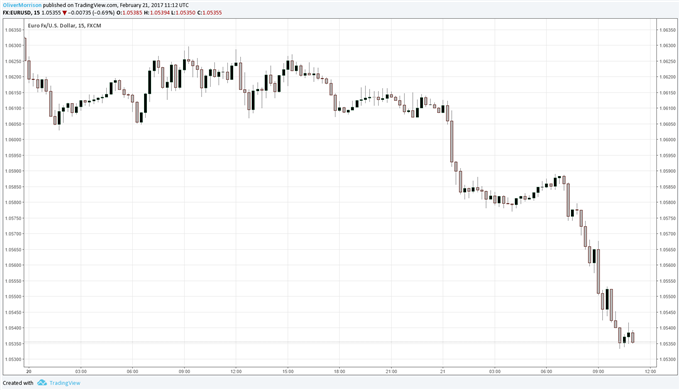 The Euro is dropping against its G20 peers despite today’s PMI data showing the Euro-Zone economy firing on all cylinders. However, inflation is only creeping up slowly.

The Euro-Zone Composite PMI climbed sharply to a 70-month high in February, from 54.4 to 56.0, and stronger than the consensus forecast of a slight fall to 54.3, suggesting that economic growth picked up pace in Q1. Growth accelerating in both manufacturing and services to rates not seen since early 2011.

The flash composite output index rose to a 69-month high of 56.2 in February from 54.1 in January. While manufacturing growth remained unchanged, the services activity index rose to 56.7 from 54.1 in the prior month. The country breakdown also revealed sharp rises in the German and French Composite PMIs. The German index improved from 54.8 to 56.1. The French PMI recorded an even sharper climb from 54.0 to 56.2.

The future output index meanwhile increased to its highest level in the series’ four-year history, indicating that European companies expect February’s strength to be maintained over the next 12 months.

However, the output prices index increased only marginally, suggesting that inflationary pressures in the region are increasing slowly. ECB policymakers will thus not yet be convinced that recent signs of a pick-up in activity will translate into sustained upward pressure on inflation.

The Euro is also feeling the burden of the rising political risks in the region. A fresh poll Monday showed leader Marine Le Pen gaining ground on her main election rivals for the French election.

The poll put the far-right candidate, who wants to scrap the Euro and replace it with a basket of new national currencies, 16 points behind centrist Emmanuel Macron, down from 20 points previously for a potential second-round run off scheduled for May. Le Pen was 12 points behind the conservative candidate Francois Fillon, from 14 points previously.

That’s rattled bond markets, too, with the premium investors demand to hold French bonds instead of German debt rising Monday to its highest since late 2012.