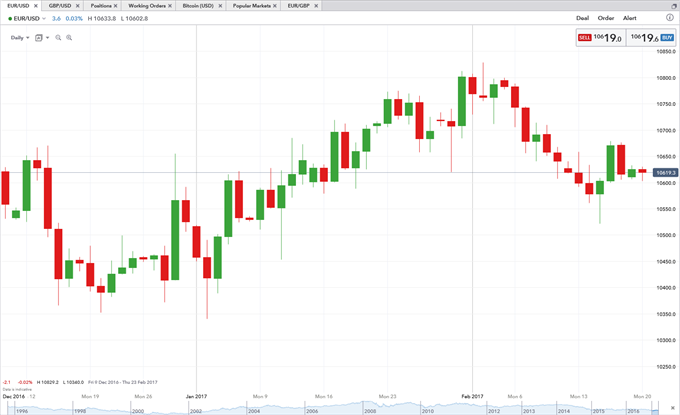 Euro Opens The Week on The Backfoot as Uncertainty Grows

- EURUSD struggles around 1.06150 as European politics come into play.

- Strong US data continues to cap any EUR upside against the USD.

Former Italian Premier Matteo Renzi resigned from the ruling Democratic Party over the weekend, opening the way for a new general election in the coming months. In addition, rumors – later called ‘fabrication’ by the EU Commission – swept the market that President Jean-Claude Junker would resign his post in March.

Ex-PM Renzi tendered his resignation at a party conference on Sunday but left the door open to re-applying at a future date. And with the anti-establishment Five Star Party riding high in the polls any general election in Italy, expected within a year, could see a further rise in the populist movement currently spreading across Europe. The Netherlands, France and Germany are all holding general elections this year as tensions mount within Europe. Netherlands far-right Freedom Party leader Geert Wilders is currently ahead in the election race although he may find difficulty in becoming Prime Minister as other parties may not support him due to his radical and inflammatory policies.

Also during European hours, rumors spread that EU Commission President Juncker would leave his post in March were later denied by the Commission. The source of the rumor, Italian newspaper Republica, said that Juncker is considering his position after already having stated that he will not run for another term in 2019.

The EUR is also under pressure from the latest batch of strong US data that shows the economy in rude health, leaving the way clear for FOMC chair Janet Yellen to start raising US interest rates. Last Friday, the Labor Department reported consumer prices rose 0.6% in January, beating expectations of a 0.3% uptick while the US Commerce Department reported that retail sales increased 0.4% beating expectations of a 0.1% rise. In addition the December figure was revised higher to 1% from a prior 0.6%.